A tour in Finokalia Station (combined with a raki feast!)

The province of Mirabello is one of the most beautiful areas of Lassithi, a place that hosts numerous monuments, monasteries, traditional villages and pristine Cretan nature. Over the past 22 years, the region also hosts modern scientific activities that give life to these remote and forgotten places, without disturbing their traditional character and natural wealth.

More in this category:

As we drive on the deserted slopes of Mirabello, nothing betrays that we head towards one of the most important monitoring stations in Europe and the only one in the Eastern Mediterranean. Of course, as we learned later, isolation, or rather the 'sterilization' of such stations from the intense human activity is necessary to conduct atmospheric measurements.

We arrive at Koudoumalo, a small village with few remaining inhabitants. After a short walk in the village lanes that hide old stone-built houses with arched entrances, we followed the other guests and researchers working at the station for a tour in its premises, before returning back to the only tavern of the village to enjoy the "fruits" of the owner’s vineyard, who produces the famous Cretan raki every year.

The station is located about 3km from Koudoumalo, at the edge of Aforesmenos Cape, an ideal remote spot without intense human presence. As we drive up to the station, an impressive landscape unfolds before us, with breathtaking views to the Cretan Sea and the coast of Lassithi. Three trailer houses that can be easily mistaken for improvised shepherd’s huts (if you overlook the long antennas that rise skywards) are in fact the facilities of one of the 15 super-stations in the European Union for atmospheric measurements. Thanks to its privileged position, the station is able to conduct precise atmospheric measurements for scientific studies on air quality, climate change, acid rain, greenhouse gases, the ozone, heavy metals and the effects of all these on human health and ecosystems.

But why do we need all these measurements? Because, quite simply, our life on earth is inseparable from the quality of the atmosphere. Regarding the wider Mediterranean region, which presents some specificities as an environmental “melting pot” of sea, atmosphere and vegetation, we now know that is a crossroad, not only for the cultures of neighboring continents, but also for the pollutants they emit. This is not good news, as we have little influence and control over environmental policies and activities in other countries, some of which are very far away (such as China). These data further emphasize the need to adopt environmental measures on a global level.

Air quality affects the marine ecosystem of the Mediterranean as well, where a lack of nutrients necessary for phytoplankton production is observed. This is due to lack of sufficient amounts of phosphorus and a surplus of nitrogen, which is also a major nutrient, but can be harmful in large amounts. The dominance of nitrogen over other important nutrients in the sea is due mainly to anthropogenic activities (fertilizers, automobiles). On the other hand, an improvement in air quality in the Mediterranean is observed in the past few years, as the levels of oxides of nitrogen, sulfur dioxide and sulfuric acid (the main ingredient in the creation of acid rain) were reduced. This positive effect is –ironically- due to the negative effects of the economic crisis, as emissions coming from human activity were significantly reduced. We listen to the scientists talking about all these issues, and when we come out of the houses of the station we see the clear blue sky of Eastern Crete with a different eye, somewhat suspicious! 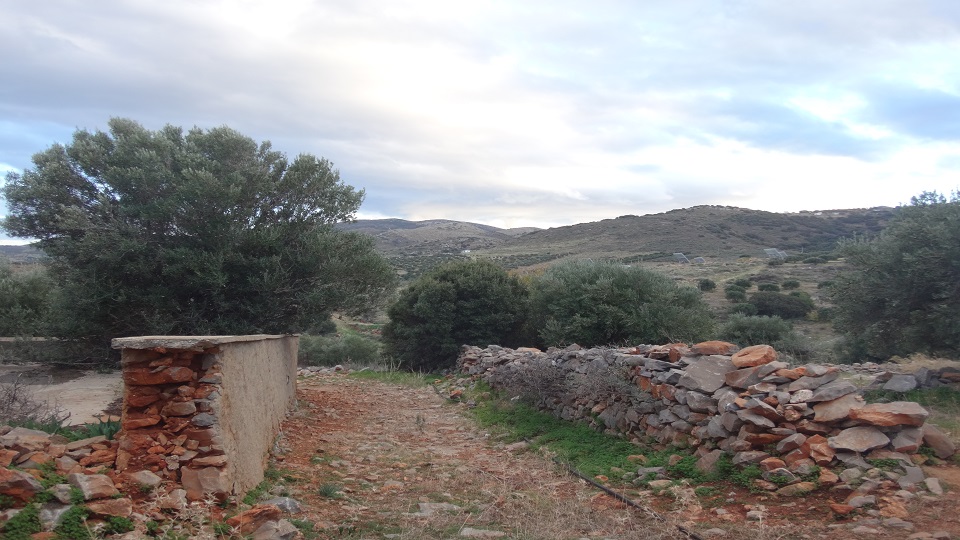 Back in Koudoumalo, the tour continues in an old school that was granted to the station by the Municipality of Agios Nikolaos in order to create a new scientific educational center and a guesthouse for visitors. The route that leads to the school is an instructive and enjoyable experience in itself: an old trail that starts from Koudoumalo and passes between bushes of sage, olive trees and old stone cisterns introduces us to the unique local environment that hosts the scientific activities of the station. The school is located somewhere halfway the cobbled trail, which concludes at the almost deserted village of Finokalia, with only 7 inhabitants. With this initiative, the University of Crete and the Municipality of Agios Nikolaos make another important step to bring science closer to society and to disseminate knowledge concerning the public good.

The case of Finokalia station shows us that modern human activity and the requirements of scientific progress are not necessarily incompatible with the principles of the protection of the environment and cultural heritage. Scientists working in the area often receive visitors from other scientific centers of Europe and have developed relationships with the few inhabitants of the neighboring villages, especially with the family of Mrs. Frederiki who owns the tavern in Koudoumalo. And as we participated in the guided tours and lectures of the station, so the station participated in the tavern’s annual raki production, offering us a unique experience that combined scientific and agricultural production and ... raki drinking!

** Special thanks to Giorgos Kouvaras and his colleagues who guided us to the station of Finokalia, and to the scientific supervisor of the Station, Nikos Mihalopoulos, for the valuable information he gave us in his speech at the Chamber of Agios Nikolaos on Saturday, November 28, 2015, titled: "Mediterranean: Crossroads of Cultures and Pollution. 22 years of environmental observations in Lassithi - Finokalia ".