In spring flowers bloom and with them blooms love, dreams and ideas. "Ploumi" blooms, the bushy endemic plant of Crete that our grandmothers and grandfathers used to fill their pillows and mattresses. And as the purple flowers of ploumi adorn the steep hills and gorges, in the village of Archanes sprouts a new idea, in the middle of the economic crisis: a cooperative effort of five people who found common ground in music, ideology and the need for expression.

Ploumi will grow as a space of solidarity, a meeting place of artistic creation, a knowledge-exchange hub, a venue to enjoy good music and –most importantly- good company. We met with the people who founded in the neoclassical building that now hosts Ploumi, we talked about their vision and shared many shots of raki! 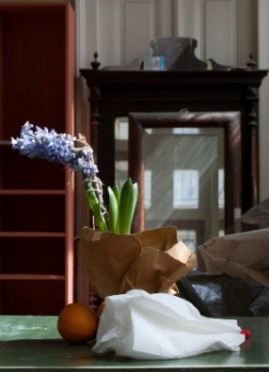 How many people run Ploumi?

Officially we are five people, because legally this is the limit for the creation of a Social Cooperative Enterprise. However, there are many more people involved in this effort in different ways. They have offered many hours of volunteer work and will continue to do so. We would say that at least 20 more people contribute to our work.

Did you know each other before?

We are friends as well as collaborators in our other occupations. People like Giorgos, known for his valuable work (see Archanes Project) joined our team. Most of us have a past, and as musicians we have supported each other in difficult times due to the crisis. Music today is often considered to be a “luxury product”.

Most of you are musicians then?

Three out of five! This is why one of the first goals we set when we conceived the idea of ‘ploumi’ was to offer free music education classes and form the Orff orchestra for children 6-8 years old. The first year of classes is completely free, if children wish to continue their music education they are referred to the music teams founded by the Municipality. The aim is to help children understand music, see how it easy it can be to learn a musical instrument.

Music classes was the first idea. What else have you thought of?

Another idea we have is to exchange knowledge with the older generations. To revive tradition, but with its meaningful sense. For example, we plan to invite old women who will teach knitting to other women who wish to learn, or other things, like bread making, and traditional recipes like maggiri. 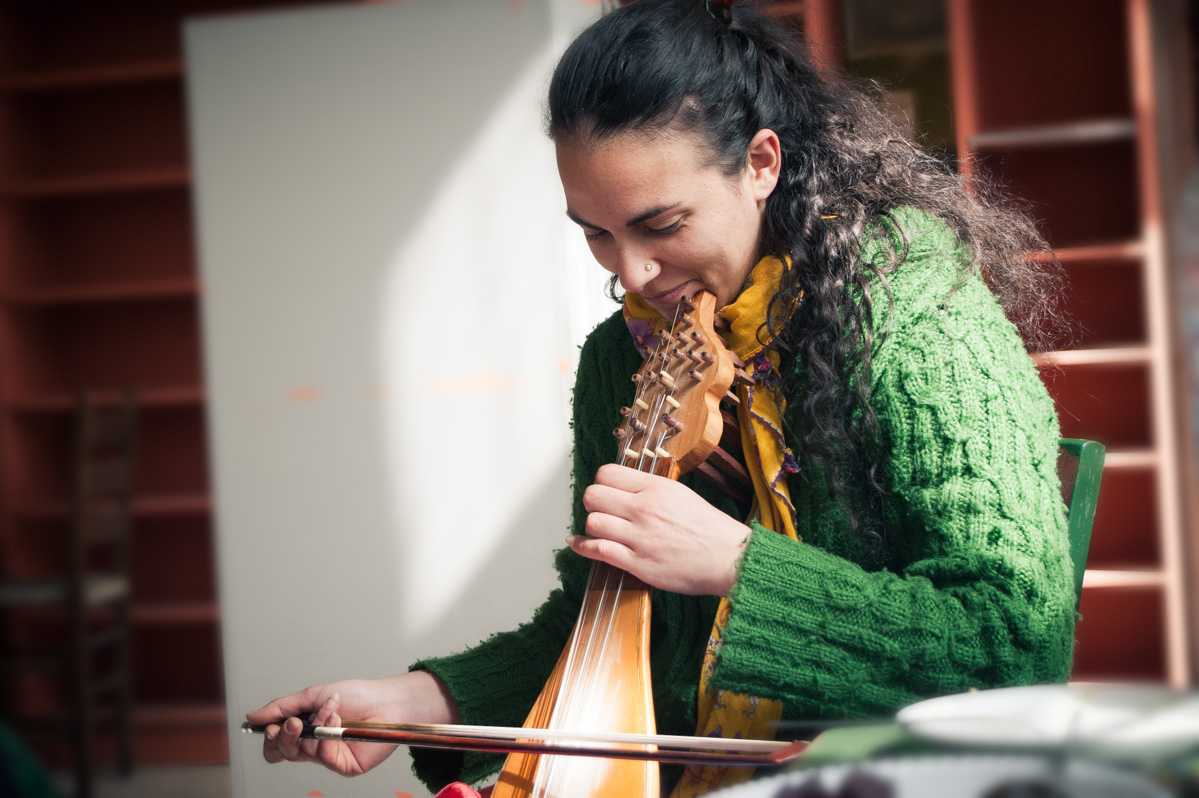 All these workshops will be offered for free?

Yes, for free. A schedule will be published in our blog every month, announcing workshops, classes, seminars, concerts ect...

Which need united you in this effort?

The need for survival –above all. We started thinking that we need a place to play music, a place to work. Some of us were unemployed. At the same time we thought, since we are starting something new, we might as well put all our dreams in it.

Therefore, since all classes are free, your main income will come from the coffee shop.

Yes, but more than that, what ‘dominates’ in the life of a musician is socialization, good company, the love s/he shares with friends. That’s why it is very important to establish a meeting place. We want a space that does ‘justice’ to musicians, respects their expression, where people will be able to have fun without problems. We want to play music, eat and have fun, but with a different way. First of all there will be no equipment, natural sound is very important. Even the best sound engineer cannot replace natural balances, sound colors and tones…we must re-discover and re-evaluate these qualities.

It is very important to establish a meeting place. We want this space to do ‘justice’ to musicians, respect their expression, where people will be able to have fun without problems

Will there be a grocery store?

(Christoforos) We are thinking of having a grocery store corner, but not like the others. We wish to collaborate with other collectives that import products from communities around the world that produce, remake or cultivate with alternative ways products that are known to a degree in Greece, such as coffee from the Zapatistas. Or local products produced in similar manners. This is one part of the idea, bring new products and introduce them to the local market. The other equally important part has to do with supporting local production that meets specific criteria and the people who make an effort to bring high quality, equitable products to the consumer. 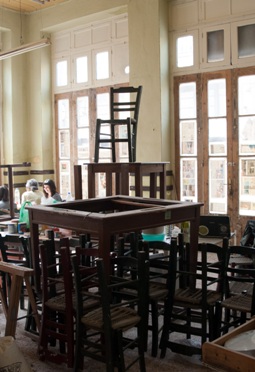 Do you focus on production methods?

(Kallia): Another idea that we wish it will work is the cooperation with collectives and not individuals. This is a way to inspire people to think how they can cooperate and work together to overcome crisis periods.

So, are you open to suggestions?

(Kallia) Yes, and in this frame we are thinking of organizing a meeting with local producers and with their input we'll decide what form our grocery store will take: who will participate, whose products we will promote, how the products will be promoted and which can be used in our kitchen and the decoration of ‘Ploumi’. Because somebody might not be a food producer but a handcrafter. In the three years I spent unemployed I met many new people who managed to use their skills with creativity in times of crisis. We have seen many miracles in this difficult period that should be promoted.

We have noticed that many people are now occupied with handicrafts. Would you say it is a kind of psychotherapy, to make something with your own hands?

The basis of psychotherapy is to continue doing what man has been doing for thousands of years to survive. I don’t consider us to be ‘alternative’ but those who still ‘hunt’ money in order to live. Psychotherapy is to be a human, functioning based on your skills and not on money and to be able to work with others – collectives are the best group therapy!

Would you say that we Greeks have the team spirit in our culture?

(Giorgos) It is very difficult but now you see it happening more and more, new communities are being created all the time.

(Kallia): Let’s focus on finding the minimum of contact, we don’t have to go deep with human interactions. Many times, this is the problem that creates conflict. Let’s stay in the minimum point, where we can “touch” each other. The rest will come on their own. When Christina and I started this effort I kept saying that Chinese people have the same word to describe “opportunity” and “crisis”. Indeed, in all historical periods and in all situations, even the most difficult ones, there is always a way to follow that will not lead to a dead end. The tricky part is seeing it.

(Christoforos)  I believe that the need for survival is the main drive that leads people to form collectives. This is why I think there are no limits to what this space can support. We want to create a wider community of solidarity.

Why did you choose the village of Archanes as a base for ‘Ploumi’?

(Kallia) Perhaps it’s the other way around, Archanes chose us. Let Christina answer, who came from Cyprus!

(Christina) We stay here because of music, because of Ross and the Labyrinth. Many artists live here now, but until now there was no space where we can all meet. Apart from that, it is an amazing place, it has everything. Plus, there is this incredible mountain, Yuchtas!

In all historical periods and in all situations, even the most difficult ones, there is always a way to follow that will not lead to a dead end

So, you envision Archanes to become something more than just a Sunday excursion for the people of the city?

We are almost certain, judging from people’s response that reside outside Archanes. 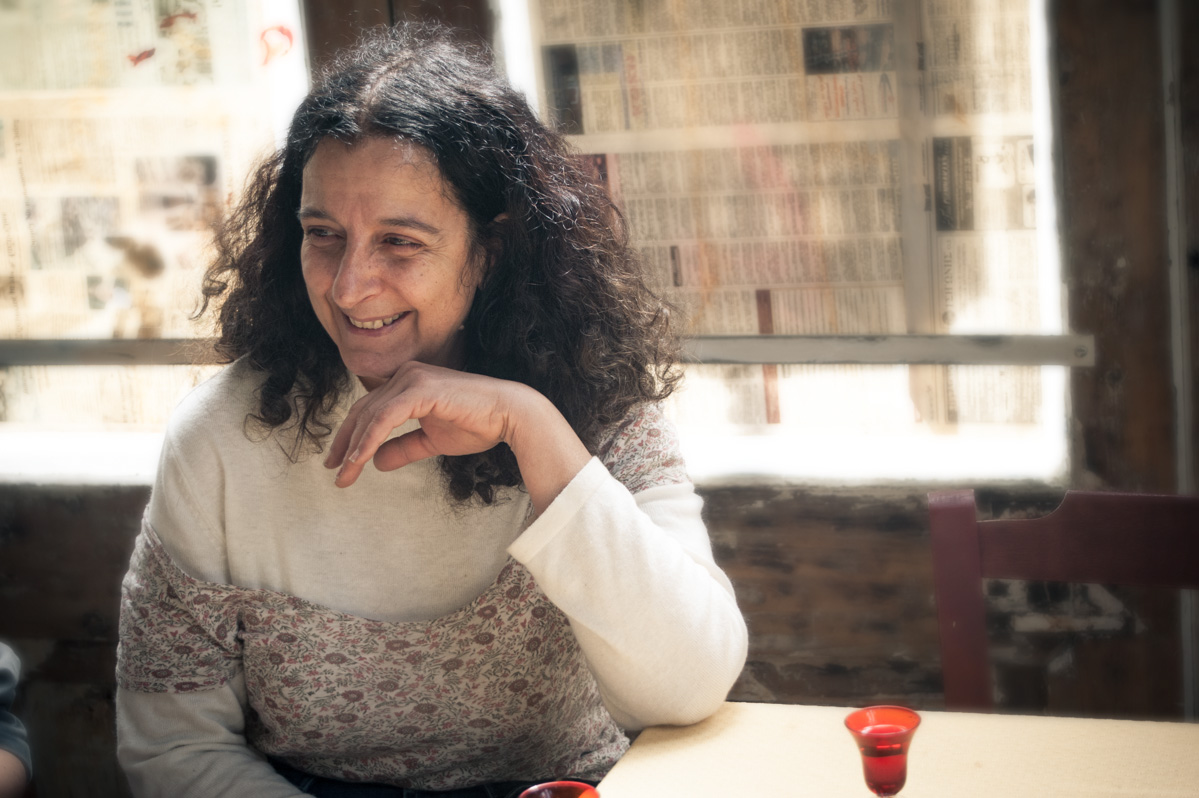 You have already started a crowdfunding campaign. Tell us more about that.

(Christina) The idea came from people that have done similar campaigns before, we had no clue this possibility existed. When we found out we were excited and we thought, why not? Because, the truth is, we do face economic problems and we try to do our best with the limited budget we have. We are very lucky as one of our friends is a cinematographer, Argyris, who offered to help us make our campaign video. The campaign expires on April 11, 2014.

Which is your monetary goal?

(Christoforos) The goal of the campaign is 10.000 euros. We list the reasons why we need those many: there are many works that must be completed, but we also need money for equipment, ventilation… the building was in a bad condition, we had to change everything. If we get crowdfunding we will have better chances to materialize our ideas. The Greek audience might not be familiar with crowdfunding but we believe that through the video and the way we promote it will make more people feel like this is a project for them, a place for them too.

(Kallia) The largest expense we would like to cover is the purchase of a car for practical reasons. We need it to reach producers and collectives around the island. Above all, we believe that the campaign is a great way for people to learn about ‘Ploumi’ and participate in our efforts. 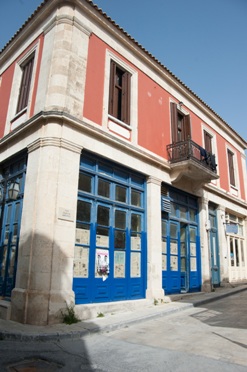 What are your ‘perks’?

There are different perks, from posters and bee wax creams to hospitality in Archanes, meals for two and more. The highest perk is a handmade Cretan mandolin of excellent quality.

What will your menu include?

Our gastronomic philosophy is based on three elements. Cretan raw food will have a central role in our menu as well as vegetarian cuisine and sometimes good quality meat from local producers. We don’t want to be ‘racist’ with anyone.  There will be nothing ‘stable’ in or menu, which will be based on seasonal products. For example, there will be no Greek salad or zucchinis in the winter, because we believe that greenhouses and organic agriculture do not work together.

And who will be the cook?

Everybody. Each will contribute with his or her abilities so that we have a good menu!

Apart from crowdfunding, have you planned any other fundraising activity?

We have already organized a collective kitchen in the cooperative coffee place Ortakia in Heraklion to raise funds and we are planning to do it again, this time with live music!

Christoforos Augoustiniatos (computer engineer, from the city of Patra to Archanes)

Giorgos Ritsakis (self identified as ‘curious’, he is the man who builds houses with mud and straw in Archanes).

Watch the campaign video and be a part of ‘Ploumi’!