From Anogia to the Plateau of Nida, the den of Zeus

A winter excursion in ancient landscapes, imbued with legends, history and ... snow

Anogia is a classic Sunday destination for the inhabitants of Heraklion (and not only), especially during the winter months, when the cold weather calls for the local traditional dish spaghetti with athotiros (white cheese) and lamb in one of the traditional taverns of the village. This short gastronomic trip is ideally combined with a snowball fight on the slopes Mt. Psiloritis. 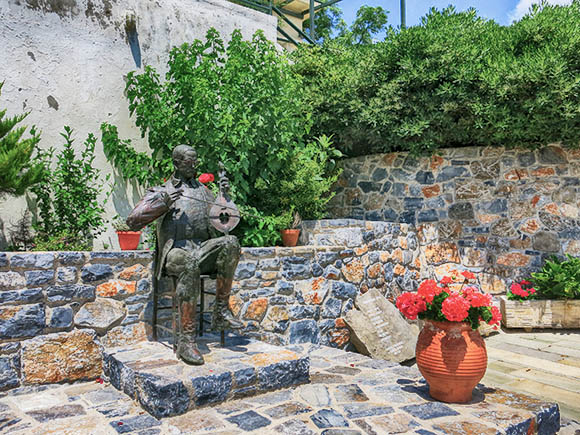 The blind lyra player, in Anogia

However, the route from Anogia to the plateau of Nida offers much more than "food and snowballing." It is a route that follows the footsteps of King Minos, who went to the cave of Ideon Andron to receive from Jupiter the laws according to which he should rule. It is the route that passes by Zominthos, one of the most important archaeological sites of Crete and the only mountainous Minoan palace. It is also a route that crosses the most characteristic landscapes of Mt. Psiloritis with unique views to the surrounding summits, from the observatory of Skinakas until Timios Stavros (Holy Cross), the highest summit of Crete, which is permanently covered in snow from winter to spring. 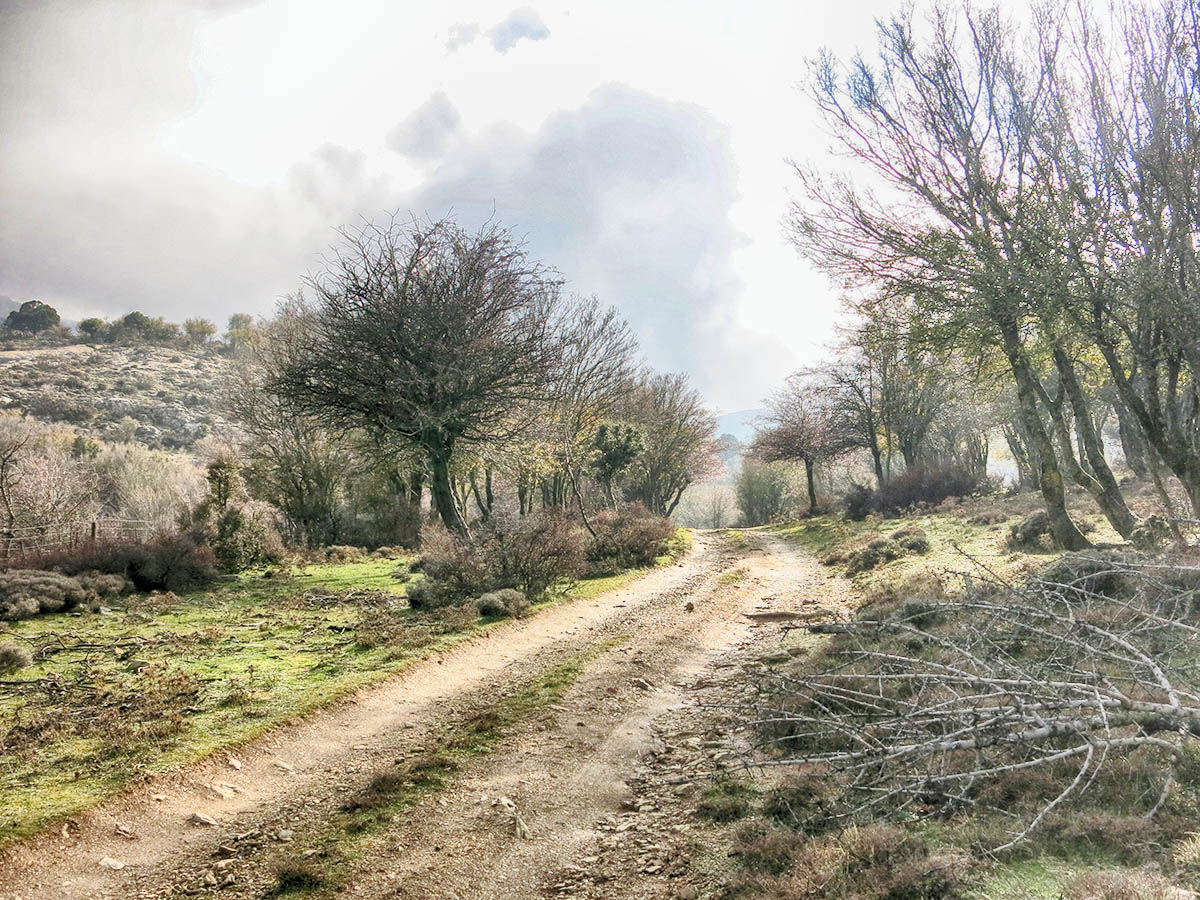 Anogia village, on the other hand, is one of the most famous mountain villages in Crete due to its heroic, bloody history. The village played an important role in WWII as a center of the British counterintelligence and a shelter of rebels, something that the inhabitants dearly paid with the 1944 Holocaust. The disturbing command of General H. Miller for burning the village to the ground is inscribed in Armi square.

Today the village has lost its traditional character (although a recent renovation of main roads has improved its image), but you will still find beautiful corners, like the picturesque square of Meintani, Armi square with the 14th century Church of Agios Ioannis (the oldest temple of the village) and Perachori, a district with a rich musical tradition that hosted great musicians such as Nikos Xilouris, Psarantonis, Vassilis Skoulas etc. Here you can still visit the humble home of Nikos Xilouris. 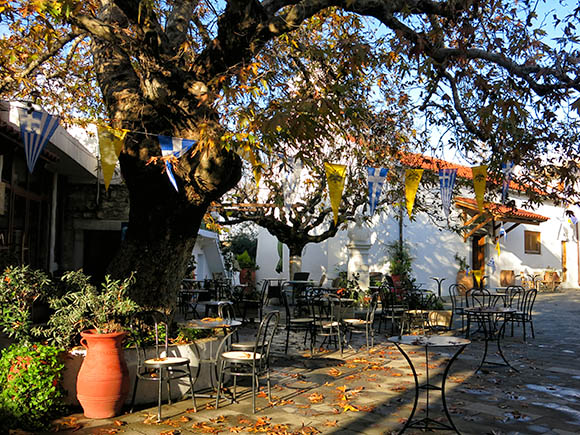 The lovely square of Meintani

You leave the village behind – you will come back for the good food we told you about - and drive on the uphill road to Psiloritis. Seven kilometers later, you arrive at the archaeological site of Zominthos. A huge, two (maybe three) storey Minoan building was excavated here, which had about 80 rooms and was constructed with the typical gray stone. Zominthos was discovered in 1982 by archaeologist Yiannis Sakelarakis who excavated the site together with his wife. During the excavation many utility items were found, jewelry, clay objects, etc. Most probably Zominthos was an important ‘station’ in the devotional path between Knossos and the cave of Ideon Antron, walked by the Minoans many centuries ago.

The region is dominated by hawthorns, deciduous trees with small red berries that create a beautiful scenery, especially in autumn and winter. In fact, a huge hawthorn stands within the archaeological site and has been declared Natural Monument. 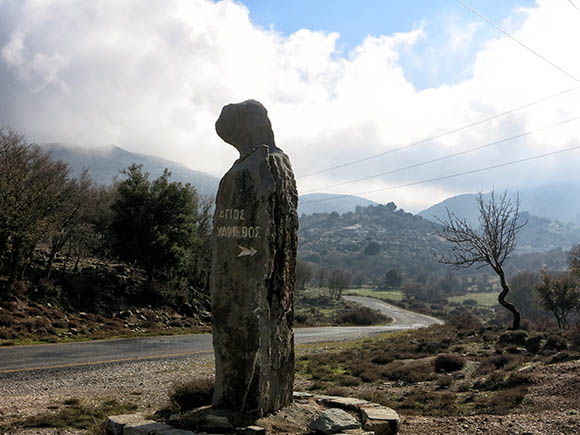 Across from the archaeological site you will see a restored Venetian creamery, built with the same gray stone. A bit further, the sound of running water coming from an old fountain will catch your attention. This fountain supplies the livestock of the area with water and you will meet several cisterns all along the route. You should also know that Psiloritis is a pastoral area with a long history and tradition, as evidenced by the numerous mitata (traditional creameries) that sprout here and there on the way to Nida. Mitata (sing. Mitato) are circular huts built from locally-gathered stones used for cheese-making and as shelter for shepherds. Their design is like a natural camouflage, fully embedded to the rocky landscape of Psiloritis. The vault of the hut has an opening to let sunlight in and fire smoke out. With a bit of luck, you might find one open and a shepherd at work...

Apart from shepherds’ huts, small chapels are scattered on the mountain slopes. These chapels belong to the most important families of Anogia, who also funded their construction. 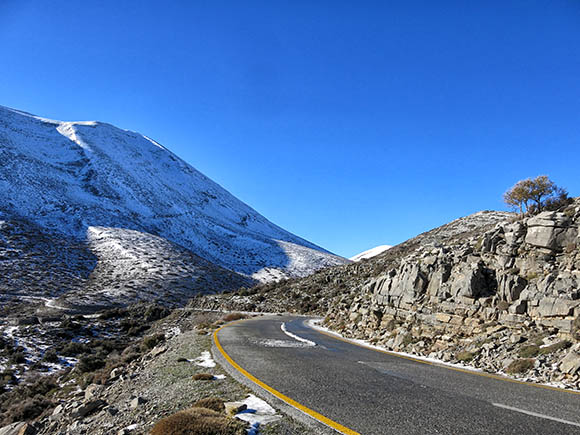 And then, you finally see the plateau of Nida from above, stretching amongst the surrounding summits, dressed with the golden green color of the wild herbs that cover it. A mystical landscape, worthy of the reverence of gods and mortals and the myths it inspired. Here is where goddess Demeter fell in love with Iasionas, a mortal man; here is where Charidimos, a hero from the epic poem Erotokritos, made love with his sweetheart. 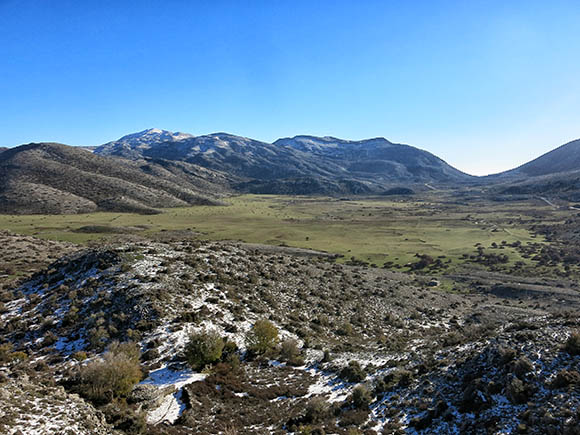 In modern history, Nida hosted more rebels and soldiers than gods, mythical creatures and mortal lovers. Today, however, the only signs of human presence in the region are the mitata and an old (almost haunted) taverns that overlooks the plateau. At the outskirts of Nida you will meet the trail that leads to the cave of Ideon Andron, a cave of great mythical and spiritual importance. 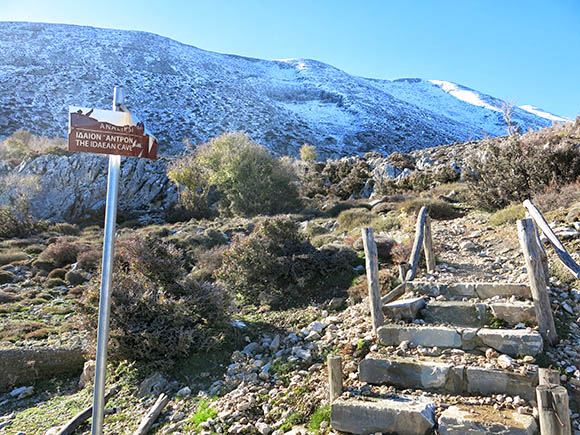 Here is where Cretan-born Zeus was raised, fed by the horn of the mythical goat Amalthea and protected by the mythical soldiers Kouretes who danced and clashed their spears against their shields so that Zeus’ father, Cronus, would not hear the baby's cry. The cave doesn’t have a particular geological decoration; besides, its significance stems from the great role it had in mythology and ancient religions: the worship of Zeus started here in Minoan times and continued until Roman times, as archaeological findings in the cave suggest. In fact, king Minos himself came here every 9 years on pilgrimage. Near the entrance of the cave you will see the remains of the ancient carved altar.

Hold on to the metaphysical feelings that emerge from your visit in mythical Nida, Ideon Andron and the lofty peaks that surround you as you return to Anogia to enjoy the pure products of this historical pastoral culture, while listening to the Cretan rhythms of Xylouris, Psarantonis, Skoulas and other great musicians that were raised in this legendary place.