From the Chestnut to the Date Trees of Chania (Milia – Chrissoskalitissa)

We often brag about Crete as the island that has it all (ok, almost!) and we found the perfect route to prove this. Follow us in a trip through the so-called “chestnut villages” to the exotic beaches of Chania and see how the landscape switches together with the climate and your mood

It is the end of October, and the eccentric Cretan climate is giving us Scottish showers – one day is hot, one day is cold (but not really cold yet). The region of Chania, however, offers a variety of options for every weather and mood, within a relatively short distance. The proposed route starts in the chestnut villages, a cluster of settlements scattered within a region where (mainly) chestnut trees grow and are harvested by local farmers every autumn, and ends in the southwestern extremity of Chania prefecture, where some of the most exotic beaches of Crete are located. The two main attractions of this route is Milia, a renovated traditional village in a chestnut forest, and the coast of Chrissoskalitissa, which includes the famous beach of Elafonissi. But there several stops you should make in between, or you may choose to make your own route, following weather or mood swings! 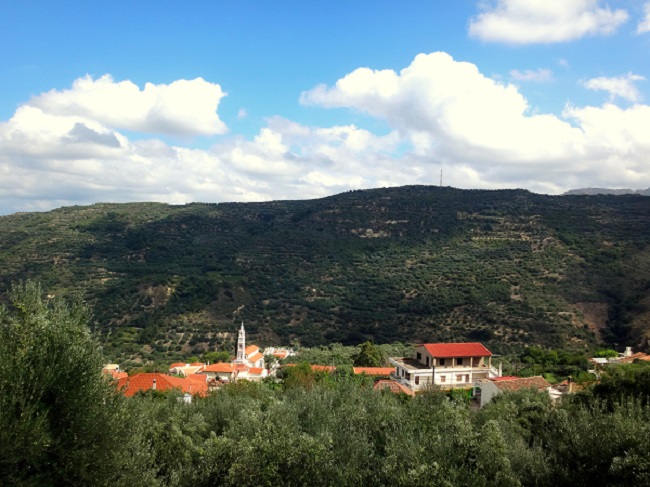 Topolia is the first 'chestnut village' you meet on the way to Milia, situated in an altitude of 280 meters, near the imposing narrow passage of Topolia gorge. There are two theories around the origin of the name ‘Topolia’. In the first (and dominant) theory, Topolia means ‘poplar’ in the Slavic language. According to this theory, this name must have been established in the Byzantine period, when Nikeforos Phokas came in Crete. The second theory says that the name Topolia can be broken down to two Greek words: topos (place) & elia (olive tree). Perhaps you want to make your first stop here to explore the upper village of Topolia; a traditional district with striking views to the gorge. The district is accessible through stone-build stairs that pass by the Church of Agia Paraskevi. You will see several ruined houses that preserve elements of traditional Cretan architecture (arches, mills, wood ovens, ect). Don’t forget to take your camera, as some semi-ruined houses play wonderfully with light!

As you leave Topolia behind, on the way to Elafonissi, you will pass a “spooky” tunnel (note that there is a stoplight that controls traffic, as only one car can pass at a time!) and the striking narrow passage of Topolia gorge. Just a few meters after the tunnel, you will meet the historical cave of Agia Sofia (Wisdom of God). The huge sign advertising the cafe-restaurant in the entrance makes sure you won’t miss it! Park your car on the road and walk up the paved path to reach the cave. The cave has two rooms at different height, the surface of which is full of impressive stalagmites. A clay figurine dating back to the 4th century BC was found in the cave, indicating that this has been a sacred place since antiquity. Moreover, Neolithic, Early Minoan, Late Minoan, Classical, Hellenistic and Roman pottery traces have been found here.
The cave is also connected to the more recent history of Crete: here is where the beheaded corpses of Psaromiliggos brothers were found buried. According to tradition, the two brothers sacrificed their lives to save the son of one of them, a notable rebel against the Venetian rulers, to grant him amnesty. In Venetian times, the only way for a rebel to gain amnesty was to bring the heads of two of his blood relatives to the authorities.
Inside the cave you will also see the chapel of Agia Sofia, where the ‘hidden’ icon of the Wisdom of God is said to exist within a crack in the rocks. According to stories, the icon was brought here from Constantinople by a group of 1,500 Cretans who fought next to the Byzantine Emperor Justinian. The cave is named after this icon, which, however is nowhere to be seen. Sounds like a job for Indiana Jones!

The plane tree of Vlatos

When you take the turn towards the mountainous village of Milia, make sure you make a stop to see the Plane Tree of Vlatos. The Plane Tree is about 1,400 years old and in 1978 it was declared a natural monument by the Greek State, protecting it from any human intervention. You can still climb it, however, touch it and feel its natural excellence! Around the plane tree extends a peaceful rest area and an ancient olive grove. There is also a café-restaurant here, if you wish to enjoy a meal or a coffee under the dense shade of this majestic tree.

The picturesque Mountain Retreat of Milia was once a real village, hidden within the chestnut forest and the schism between two radically different mountain slopes: the first, where Milia is situated, consists of slaty soil, favoring the growth of the forest; the second slope consists of carbonate soil, allowing only the growth of low, shrubby vegetation and herbs. The owners of Milia Mountain Retreat had vivid memories of a beautiful village with stone made houses that was almost inseparable from the natural landscape. Just a few candle lights stood as the only witness of human civilization in the forest as the night fell. According to their childhood memories, whatever grew on the blessed land of Milia was tastier and larger, from chickens to vegetables!
The village of Milia, together with the temple of Agios Georgios that still stands in Kato Milia, was recorded in Venetian maps. The village always had a small population and was devastated in medieval times, when epidemic diseases spread on the island. Since then, the village was sporadically inhabited in times of war, or for pastoral / agricultural activities. The last inhabitant left the village somewhere near the ‘60s and since then the settlement was completely deserted. After many passionate efforts to ‘save’ the traditional character of the village and the unique nature that surrounds it, the owners of Milia Mountain Retreat managed to take the land of their grandfathers, and together with other families that owned land in the village, they managed to recreate the nostalgic atmosphere of older times and established one of the most beautiful ecological mountain retreats on the island. Today Milia is a perfect destination for those you want to escape the complexities of modern life and spend time in pristine nature. And even if you are not planning on staying in the houses of Milia, you can always come here to enjoy a nice meal in the restaurant with striking views to the mountain, or walk in one of the mountain trails that start from Milia (ask the owners!) 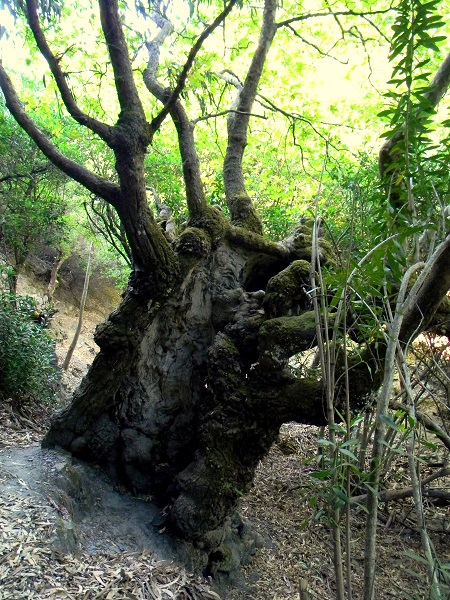 Between Milia and the village of Vlatos you will meet the Park of Peace, established in 1976; an initiative of ecologically aware residents of Vlatos and the

local administration. As the inscription declares (in German?), this park is “dedicated to science for future studies; to politicians, for reflection; to visitors, for inspiration and joy”. Today the park is abandoned and relatively inaccessible, but even this fact inspires reflection.

The fortress-like Monastery of Chrisoskalitissa is dedicated to the Assumption of Virgin Mary (celebrated annually on August 15) and linked to an intriguing legend: there is an extra step in the 98 stairs that lead up to the Monastery, and it is made of gold...you can’t see it? Then probably you are not faithful enough! According to the legend, only true believers can see the golden step, from which the Monastery took its name (Chriso = golden, and skali = step). Sounds like another job for Indiana Jones! According to another more realistic version, during the Ottoman period, the golden step was sold by the Patriarchate to the Sultan to erase the tax debt of the monastery. The Monastery existed since Venetian times, when it was dedicated to St. Nikolaos. The Monastery also has a small Byzantine and Folklore Museum. 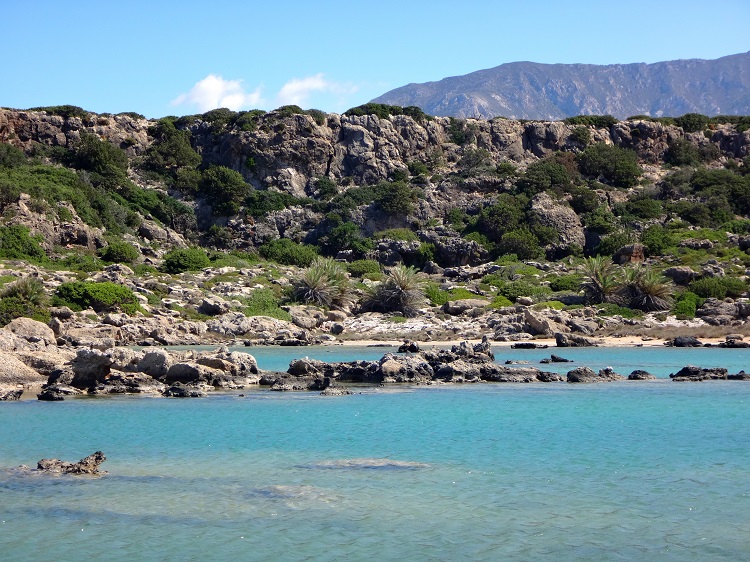 The beach of Aspri Limni, an untouched natural paradise, is located just 500 meters west of the Monastery of Chrissoskalitissa. Visiting a beach in the verge of winter sounds unheard of for many people (especially locals). However, we believe that off-season is the best time to experience the true beauty of Cretan beaches and the serenity of their landscape. And if the day happens to be warm, you can always try swimming! Aspri Limni is the ideal beach to visit in wintertime, as its shallow waters never get too cold, but also, they are not ideal for ‘actual’ swimming. Aspri Limni means “white lake” in Greek, and you will understand why. A series of rocks create a natural ‘border’ to the open sea that gives the illusion of a lake. An exotic lagoon, to be precise, adorned by intricate rocks and date trees, panting the rhythm of the chilly sea breeze. Because, the striking beach of Aspri Limni is not only idyllic, but is also home to a micro reserve of Phoenix theofrasti (Cretan palm date), an endangered palm tree of Crete. Getting to the beach can be a little tricky, but we will attempt giving you instructions here: Turn left on the last intersection you will meet as you approach the Monastery of Chrissoskalitissa (there is a small wooden sign to the Phoenix Theophrasti microreserve). After you pass a small cluster of houses, turn right on the second road you will meet. Just a few meters before the asphalt road ends (and turns into a dirt road) and right after you pass a tin fence, turn left and follow the road until it leads you straight to the lagoon.

Found it? Congratulations! From the many hidden sights and mysteries of this route, you just unraveled one!