Hiking on the Holy Mountain of Stroumpoulas

The pyramidal mountain of Stroumpoulas -as it seems, when you look at it from Heraklion- offers one of the most beautiful nearby escapes for naturalistic, religious and ... romantic walks! Because it is worth staying on the top until the sunset to see the mountain’s triangular shadow slowly covering the city, while the daedal peaks of Milopotamos behind you are painted orange

If you’ve been to Heraklion you’ve probably seen it: the emblematic summit of Stroumpoulas (Stroumboulas, Strouboulas) reigns west of the city and has always been a place of worship with centuries-old history. In our days, every year pilgrims walk to the summit and the chapel of Timios Stavros (Holy Cross) on its celebration day (September 14) and on the celebration day of Profitis Elias (July 20). Many of them arrive the day before to attend the evening service and spend the night around the chapel of Timios Stavros with their sleeping bags, setting up an impromptu feast with music and food that ends with the morning service.

The inhabitants of nearby villages (Tylissos, Marathos, Rogdia, Gonies, Astiraki and Damasta) always had a special connection to the mountain. This is where they fulfill their religious oblations (known as tama in Greek) and organized the best feasts around the chapel. They cultivated in the fertile plateau that lies at the foot of the mountain, and farmers even used its shadows as a “watch” in older times.

According to historical evidence, before the Venetian period (1205–1669) Stroumpoulas was known as ‘Stroggulo’ (which means ‘round’ in Greek), probably because of its shape. 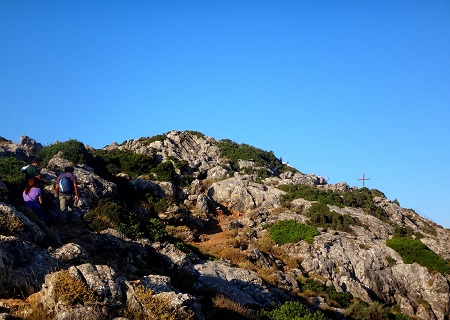 Later, Venetians called it ‘Stromboli’, because it reminded them the namesake volcanic island of Sicily, and this name is mentioned by many travelers of the era and in Venetian maps, until the compromising name 'Stroumpoulas' finally dominated. According to narratives, the chapel of Timios Stavros was built by a rich man from the village of Fodele (El Greco’s village). Initially, the chapel had a tin cross, which was taken down by the ruthless Ottoman ruler Bethri Agha, who locked it in a chest. Rumors say that the cross returned to the chapel by miracle, and not one but two times, as the angry Agha tried to capture it again! This cross remained at the chapel until 1941, and some residents of Tylissos still remember it.

The chapel of Timios Stavros is also mentioned in the memoirs of Ottoman traveler Evliya Celebi, who watched the siege of Candia (as Heraklion was called at that time) from the summit of Stroumpoulas. One thing is for sure, however: the chapel existed since the Venetian period (even though it was destroyed and rebuilt several times). In fact, in a 1594 report directed to the Administration of Venice, there is reference to the local custom of the ascent of pilgrims to the chapel of Timios Stavros, who walked to Stroumpoulas on the same trail as you today. An even more exciting fact: consider that ancient Tylissians climbed up the same mountain four thousand years ago to fulfill their own religious oblations, carrying clay pots and copper idols. At the southern part of the plateau of Stroumboulas – and specifically up the summit of Pirgos- archaeologists have found the remains of a peak sanctuary with plenty of space around it, where the Minoans definitely organized their own feasts!

To reach Stroumpoulas, you need to drive on the road directed to the village of Damasta, and about 500 after you pass Voulismeno Aloni, you will see a detour to the left that will lead you to the plateau after about 1,5 km. A few meters after you pass the chapel of Agios Georgios (St. George) you may park your car on the dirt road that leads to the mountain to your right and start walking on the trail that leads to the chapel of Timios  Stavros, 800 meters above the plateau. The hike lasts 30-45 minutes, it is relatively easy and suitable for all ages. The few oaks and bushes you will meet on the trail offer their shade if you want to take a break, and the scents of Cretan herbs fill your lungs and "purify" them from the city fumes.

At the end you might be a little tired, but your reward is a wonderful panoramic view that spreads from the gulf of Heraklion to the coast of Hersonissos and beyond, until the mountains of Lassithi. And as the sun sets, you see the triangular shadow of Stroumpoulas softly spreading over Heraklion and the summits of Milopotamos painted orange, and the poet inside you wants to express all that beauty; perhaps with your photographic lens, or –if you are even more romantic- on a piece of paper.