When Henry Miller sat on the throne of Minos 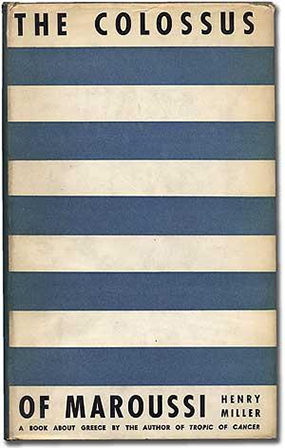 Henry Miller came to Greece in 1939 from Paris where he lived, despite the bad omens for the upcoming WWII. He stayed for several months, meeting significant Greek intellectuals of the time (Seferis, Tsatsos, Katsimbalis, Hadjikyriakos Gikas), he traveled in various parts of Greece and discovered a country full of "light and poverty". Fascinated by the idea of seeing the Palace of Minos at Knossos, he visited Crete. The memories of his travels in Greece were recorded in the book "The Colossus of Maroussi", published in 1941 (in Greece much later, in 1965). We chose a few delightful excerpts from the author's impressions of Crete.

Henry Miller in the narrow lanes of Heraklion

"We came down at the seaport of Herakeion, one of the principal towns of Crete. The main street is almost a ringer for a movie still in a third-rate Western picture. I found a room quickly in one of the two hotels and set out to look for a restaurant. A gendarme, whom I accosted, took me by the arm and graciously escorted me to a modest place near the public fountain." 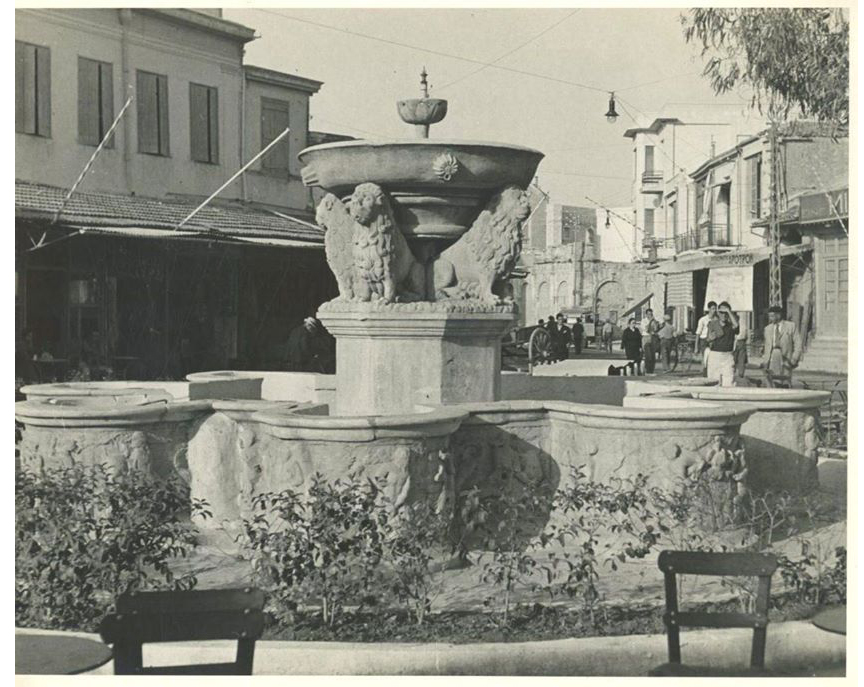 "I left to take a quick stroll through the town. A few doors away, in a converted mosque, a cinema announced the coming of Laurel and Hardy (..) I believe the cinema was called “The Minoan”  (he means the Basilica of St. Marcus which used to be a cinema from 1930 to 1956). 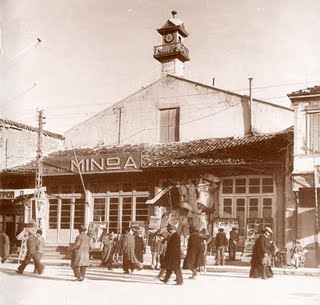 I wondered vaguely if there would be a cinema at Knossus too, announcing perhaps the coming of the Marx brothers. Herakleion is a shabby town bearing all the ear-marks of Turkish domination. The principal streets are filled with open shops in which everything for men’s needs are made by hand as in medieval times. From the countryside the Cretans come in garbed in handsome black raiment set off by elegant high boots, of red or white leather offtimes. Next to Hindus and Berbers they are the most handsome, noble, dignified males I have ever seen."

"I walked to the edge of the town where as always in the Balkans everything comes to an end abruptly, as though the monarch who had designed the weird creation had suddenly become demented, leaving the great gate swinging on one hinge. Here the buses collect like broken-down caterpillars waiting for the dust of the plains to smother them in oblivion. I turned back and dove into the labyrinth of narrow, twisting lanes which forms the residential quarter and which, though thoroughly Greek, has the atmospheric flavor of some English outpost in the West Indies (…) I wandered about in a daze, stopping now and then to listen to a cracked record from a horned phonograph standing on a chair in the middle of the street."

Every inch of Herakleion is paintable; it is a confused, nightmarish town, thoroughly anomalous, thoroughly heterogeneous, a place-dream suspended in a void between Europe and Africa, smelling strongly of raw hides, caraway seeds, tar and sub-tropical fruits.

At the throne of Minos, Knossos

"Next morning I took the bus in the direction of Knossus. I had to walk a mile or so after leaving the bus to reach the ruins. I was so elated that it seemed as if I were walking on air. At last my dream was about to be realized (..)"

"Knossus, in all its manifestations suggests the splendor and sanity and opulence of a powerful and peaceful people. It is gay-gay, healthful, sanitary, salubrious. The common people played a great role, that is evident. It has been said that throughout its long history every form of government known to man was tested out; in many ways it is far closer in spirit to modern times, to the twentieth century, I might say, than other later epochs of the Hellenic world. One feels the influence of Egypt, the homely human immediacy of the Etruscan world, the wise, communal organizing spirit of Inca days. I do not pretend to know, but I felt, as I have seldom felt before the ruins of the past, that here throughout long centuries there reigned an era of peace. (..)" 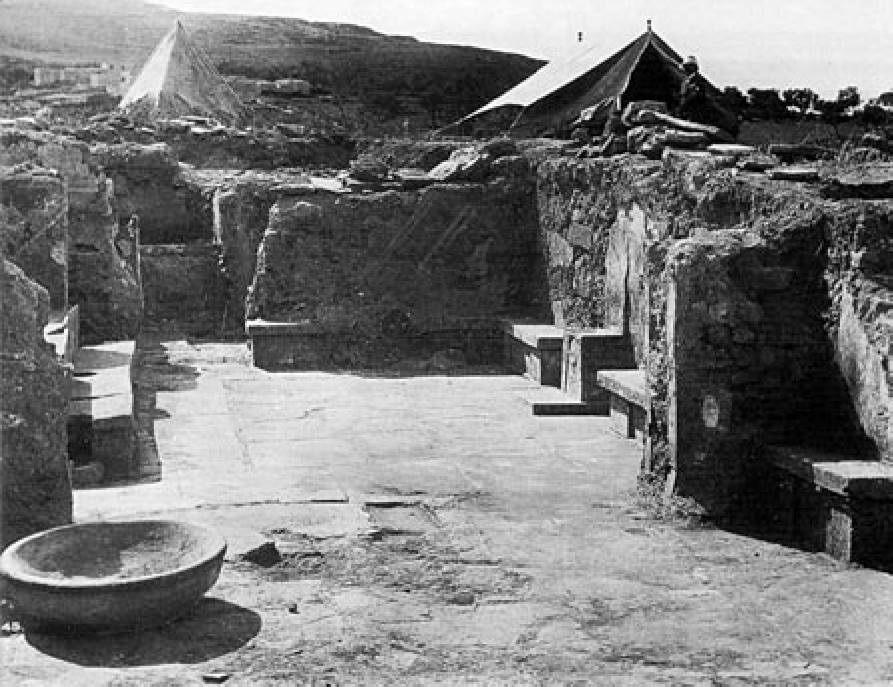 The throne of Minos in 1900, before the interventions of Evans

"Seated on King Minos throne I felt closer to Montezuma than to Homer or Praxiteles or Caesar or Dante. Looking at the Minoan scripts I thought of the Mayan legends which I had once glimpsed in the British Museum (..). Knossus, or what happened there almost fifty centuries ago, is like the hub of a wheel on which many spokes have been fitted only to rot away. The wheel was the great discovery; men have since lost themselves in a maze of petty inventions which are merely accessory to the great pristine fact of revolution itself."

"Tomorrow I’ll go to Phaestos, I said to myself, picking my way through the fang-bitten streets like a laminated water-moccasin. I had to remind myself that I was in Crete, a quite different Crete than I had pictured to myself in my dreams (...)"

"We swung through the dilapidated gate in a cloud of dust, scattering chickens, cats, dogs, turkeys, naked children and hoary vendors of sweets to right and left; we burst at full speed into the drub and dun terrain of gutta-percha which closes in on the city like mortar filling a huge crack (…) We passed imperceptibly from the quick bad lands to a fertile rolling region studded with fields of bright-colored crops; it reminded me of that serene steady smile which our own South gives as you roll through the State of Virginia (…)" 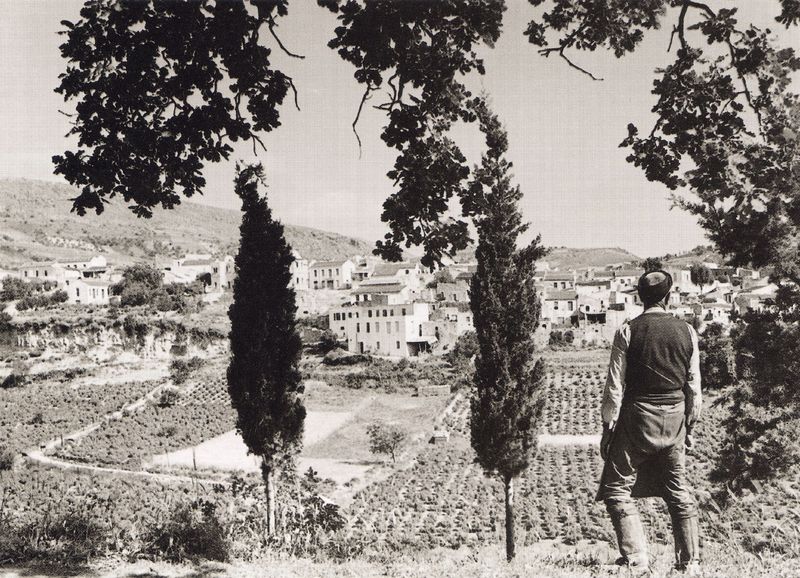 Landscape outside the village of Avgeniki, Nelly's 1939

"We roll down in a crisp, crackling mountain side into an immense plain. The uplands are covered with a sheath of stiff shrub like blue and lavender porcupine quills (...) I get down and walk through a lake of mud to examine the ruins of Gortyna. I follow the writing on the wall. It tells of laws which nobody obeys any longer. The only laws that last are the unwritten ones. Man is a law-breaking animal. A timid one, however."

"It is high noon. I want to have my lunch in Phaestos. We push on (…) We glide through a deer run and the car stops at the edge of a wild park. “Up there”, says the man, pointing to a steep bluff – “Phaestos”. He had said the word. It was like magic. (..)"

"It was one of the few times in my life that I was fully aware of being on the brink of a great experience. And not only aware, but grateful, grateful for being alive (..) I had the feeling of being surrounded by deer. I had another strong insistent intuition: that Phaestos was the female stronghold of the Minos family. The historian will smile; he knows better." 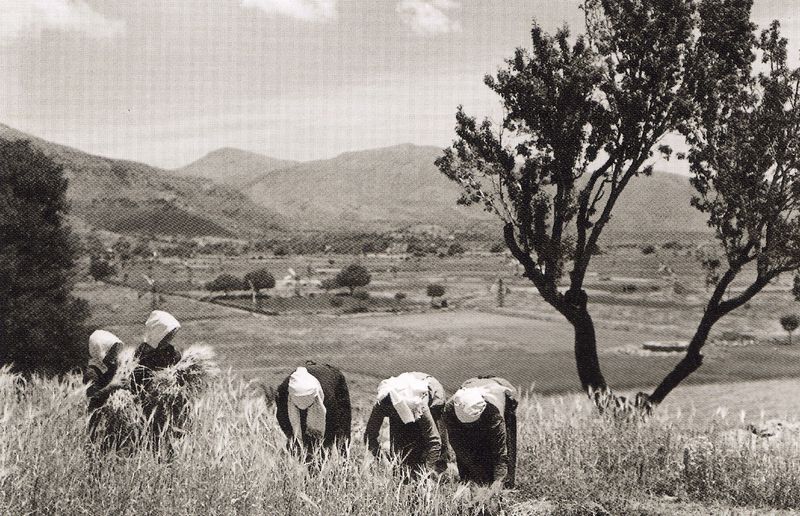 "(..) I descended the broad steps of the levelled palace and glanced here and there automatically. I hadn’t the faintest desire to snoop about examining lintels, urns, pottery, children’s toys, votive cells and such like. Below me, stretching away like an infinite magic carpet, lay the plain of Messara, girdled by a majestic chain of mountain ranges. From this sublime, serene height it has all the appearance of the Garden of Eden. (…)"

"Phaestos contains all the elements of the heart; it is feminine through and through"

"Even before I had sailed for Crete I had been thinking of Persia and Arabia and of more distant lands still. Crete is a jumping off place. Once a still, vital, fecund center, a navel of the world, it now resembles a dead crater (..)"

"Crete is a cradle, an instrument, a vibrating test tube in which a volcanic experiment has been performed. Crete can hush the mind, still the bubble of thought. I wanted so long and so ardently to see Crete, to touch the soil of Knossus, to look at a faded fresco, to walk where they walked. I had let my mind dwell on Knossus without taking in the rest of the land. Beyond Knossus my mind pictured nothing but a great Australian waste."

Henry Miller left Crete and shortly after Greece, succumbing to the pressures of the American embassy directed to all American citizens, as the war had already began. As he writes in his book, when he was on the boat from Crete to Athens:

"I had completely forgotten about the war. The radio was bringing it to us again – with our meals. Always just enough progress and invention to fill our mind with fresh horror"

Fortunately, he did not stay long enough to see the images from the bombed Heraklion... 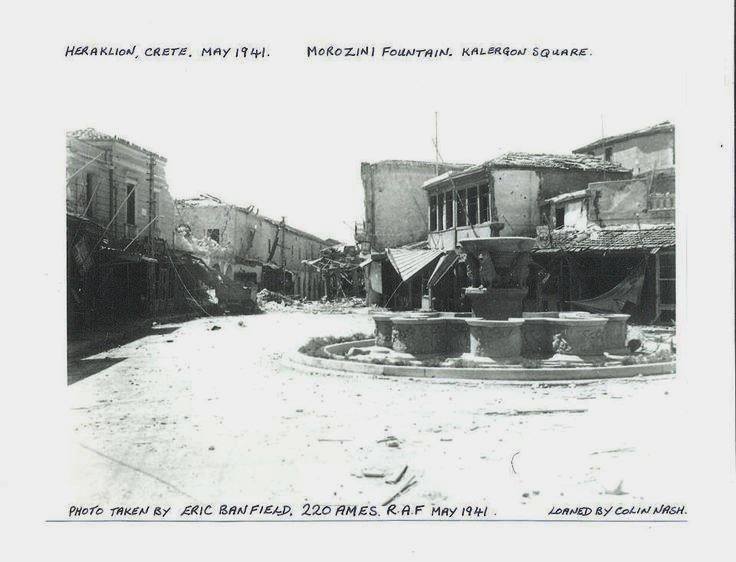