The Minoan Palace of Malia

The third largest Minoan palace of Crete, once ruled by mythical King Sarpedon, overlooks the Cretan Sea with the imposing mountain of Selena in the background.

Sarpedon was the son of Zeus and Europa and brother of Minos. According to mythology, he was ruling the Palace of Malia, the third largest Minoan Palace of Crete, covering 7.500 square meters of land. The Palace complex was initially built in 1900 B.C and was destroyed in 1700 B.C, together with the other Minoan centers of the time.  It was rebuilt in 1.650 B.C at the same site, until it was utterly and forever destroyed in 1.450 B.C. Today, visitors in this significant archaeological site can mainly see the ruins of the Neopalatial complex; only a small part of the first Palace is preserved on the northwest part of the complex.

Even though the Palace of Knossos is the star of all Minoan Palaces, the one in Malia offers a totally different experience. First of all, there are fewer…artistic interventions, leaving most remains in their initial form and position. Second, visitors have more freedom to move around and explore the site as they wish. However, there is a ‘recommended’ route to follow: from the north entrance, walk to the north courtyard and from there to the great central courtyard (48x23 m.) and the epicenter of the Palace. The courtyard is surrounded by staircases, reception halls, storerooms and religious chambers, such the ‘Loggia’ and the ‘Pillar crypt’.

At the center of the courtyard, which certainly had monumental character with two arcades on its north and east side, stands the altar. From the courtyard you can take a tour at the east wing of the Palace, where storerooms for liquids were situated, with low platforms for the vessels and a system of channels and liquid collectors. The south wing was mostly covered by residential rooms and hospitality chambers and in the southwest part of the Palace there are eight characteristic circular granaries. At the southwest part of the courtyard you will also see the staircase where the famous “kernos” of Malia was found (a stone made ritual vessel with a series of shallow depressions arranged in a circle). The main façade of the Palace was its west side, which also had a second floor for the official chambers of the Palace residents. 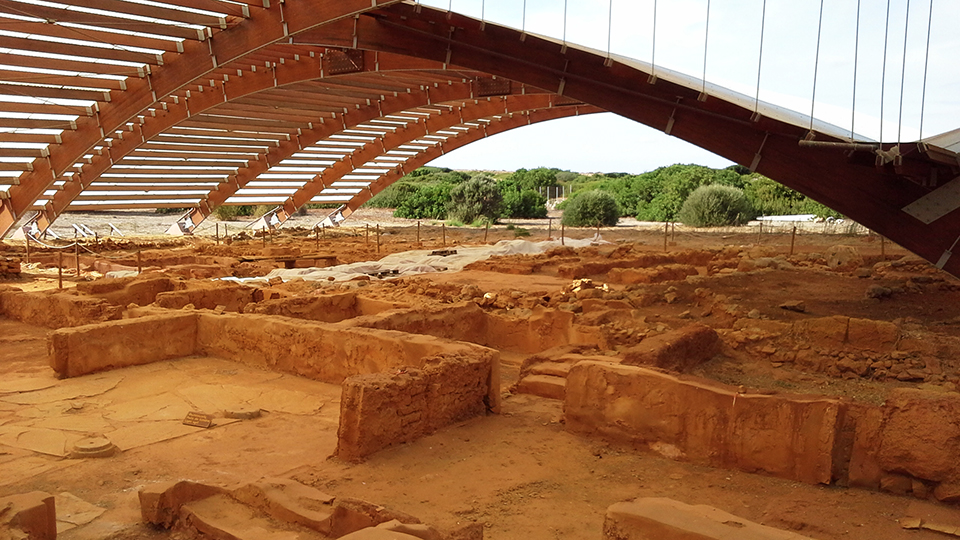 In Minoan times, the cities extended around the Palaces and the one of Malia was one of the most significant ones, even though its name remains unknown. Today we can still see the remains of the so-called “Quartier M”, the largest and best-preserved building complex of the Protopalatial period, covering an area of more than 3,000 square meters. Until now, two major buildings have been excavated: building A (840 m2) and Β (540 m2), as well as 7 other smaller buildings. Due to their large size, buildings A and B must have been something more than simple dwellings. In fact, they had spaces similar to the ones in the palace, such as storerooms, religious spaces, residential rooms and reception halls. Therefore, most probably they were administrative centers with important social and political role. As for the smaller buildings, most have been identified as craftsmen workshops (potter, bronze-worker and seal stone engraver).

The feeling you get as you walk over this ancient city, built with the reddish stone and ground of the region, under the huge protective covers, cannot be easily described. This is why, after reading this article, you should plan your next excursion to Malia!