The best preserved ancient city in Crete rests on the saddle of two hills and overlooks the Gulf of Mirabello.

It may sound like an overstatement, but we claim that a remarkable archaeological site can be found in almost every corner of the Cretan land. The long history of the island has left “scars” everywhere; and while the Minoan palaces of Knossos and Phaistos enjoy most of the fame (and rightly so), lesser known archaeological sites will surprise you with their hidden treasures and beauties.

Ancient Lato is a small revelation and a very good reason to make a detour to the village of Kritsa when on your way to Agios Nikolaos. The road to Lato starts from the village entrance and will first take you through the olive groves of the region before it concludes in the ancient city.

Lato is considered to be the best-preserved city of the Classical / Hellenistic period in Crete, and one of the best preserved in Greece, something that becomes obvious from the first moment you pass through its impressive gate. You first see the strong defensive wall, then the main road that climbs up the hill, forming approximately ninety steps, a series of spaces that once housed shops and workshops and last but not least, the city’s agora.

The ancient agora extends in an irregular trapezoidal shape that occupies a central position in the city, making its crossing mandatory for its ancient residents (and today for you). From this point you face the two hills where Lato stretches, the northern and southern citadel. North of the agora, a monumental stairway that served as a gathering place leads to the most important building of the city, the “Prytaneion”, where the lords met. Prytaneion, as the signs inform us, consisted of a colonnaded courtyard in the east and a rectangular room with a central hearth in the west, the "restaurant". This is where princes enjoyed their meals and accepted official foreigners 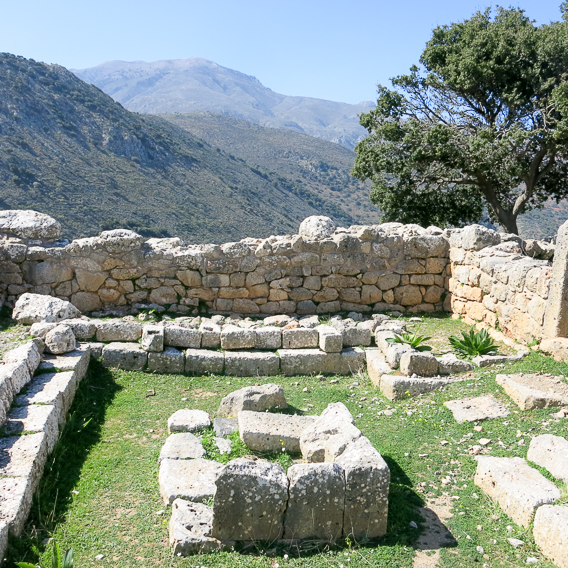 If you want (and if you wear appropriate shoes), you can climb even higher to admire a panorama of the ancient city and the lush landscape around it. From the top of the citadel, the ancient residents of Lato were able to supervise almost all their territory.

Next, your steps will lead you to the southern citadel. A strong wall supports an oblong plateau where the ruins of a large temple still stand. In the background lies the base of a devotional statue, which did not survive the passage of time. East of the temple you will see the remains of a theater, partly carved into the rocks and partly built. From here, the view of the Gulf of Mirabello and Agios Nikolaos is impressive. 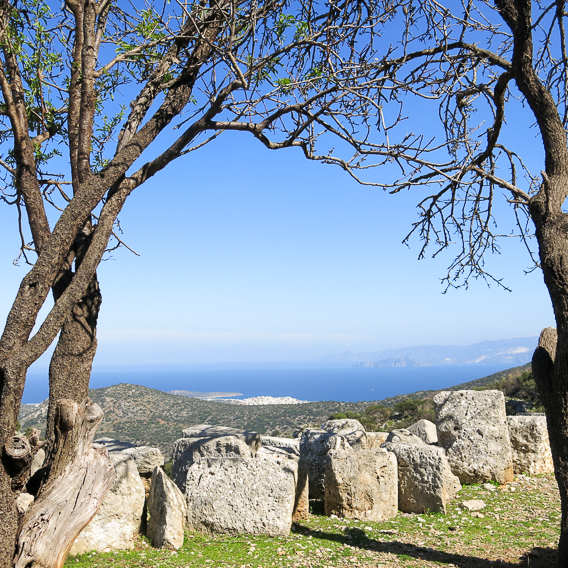 Hidden from the eyes of the many, in this privileged position, Lato managed to maintain its glamor and charm up to our days, compensating the traveler who reaches its gates. The pristine nature of the region adds up to the magic of this unique archaeological site; epecially in springtime, when wildflowers grow among the ruins and the Cyclopean walls and the remains of this great civilization glisten under the warm sun, making the landscape look dreamy, like a fairytale.

This would be the best time to visit Lato, and let your senses guide you in a fantasy tour to the wonders of the ancient city and the everyday life of its residents.