You are here:Polis • City Guide • What to see
CRETAZINE
Expand Map Shrink Map

The sinaitic temple of Agia Ekaterini was probably built during the 13th century and was renovated two times, during the 15th and 17th century. Agia Ekaterini housed the headquarters of the “Stravaganti Academy” between the 15th and 17th century, founded in 1590 by Cretan scholars who studied in Italy. Thus, the temple played an important role in the intellectual and artistic creation on the island. During the Turkish occupation, Agia Ekaterini became a mosque, like most other Christian temples of the city. In fact, you can still see traces of the minaret, which was demolished after the liberation. 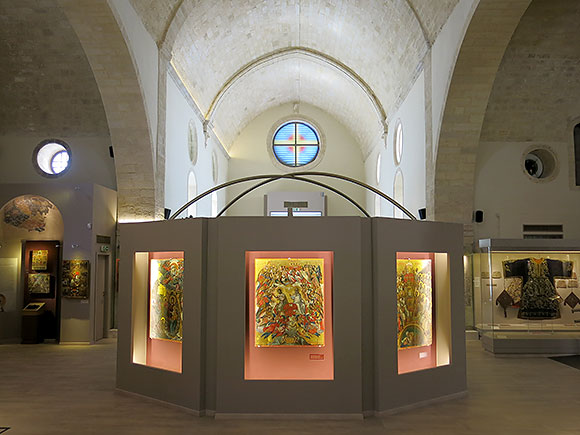 Today the temple of Agia Ekaterini (after remaining closed for many years for restoration) has become a religious museum of the Archdiocese of Crete; a museum with a modern museological approach, using multimedia, touch screens, etc. .

The exhibition includes important ecclesiastical relics from various churches and monasteries of Crete, such as 15th-19th century icons of exceptional art, fragments of frescoes, woodwork, leather bound sacred books and manuscripts from the Byzantine period, hand-embroidered ecclesiastical vestments and other objects.

The museum is really worth a visit - even if you are not possessed by strong religious sentiments - for many reasons. First of all, because you have to see the interior of this magnificent monument and read about its architectural and religious history. Then, because among the displayed icons are some made by Michael Damaskinos, a painter who traveled to Venice at the time when famous painters such as Titian, Veronese and Tintoretto reached their creative peak, and then returned to Venetian Candia (1583) to create works that ‘marry’ Byzantine and western elements. The collection of the museum features six very important works of Damaskinos that contain multiple ‘messages’ conveyed with incredible detail. Apart from Damaskinos’ works, the museum hosts works of G. Kastrofylakas, taken from the small temple of Agios Minas, and works of another great Cretan painter of the early 15th century, Angelos Akotantos. In short, you will get a good taste of the works that inspired the so-called "Cretan School" in hagiography.

Agia Ekaterini is situated in one of the most beautiful and peaceful city squares. After your visit to the museum, we suggest you take a rest in the benches or in one of the cafes of the square, gazing at the pigeons and the children playing football...