Landing on the mysterious island of Agios Theodoros

A small tour on the lonely island that overlooks the busiest beaches of Chania. The ancient Akoition or Thodorou -as it is commonly known in Chania- is one of the few pristine regions of Crete and home of the Cretan wild goat

Written and explored by "Peripeton"

The petrified leviathan that threatens the northern coast of the gulf of Chania with its mouth wide open was not always there, according to legends. The ancient Akoition (meaning, uninhabited) was created when this sea monster, together with its little offspring, were turned into stone by god Poseidon, rescuing the residents of the coast from certain death. The mama-beast of 697 acres is now known as Agios Theodoros (St. Theodore),  from the little chapel situated on the island, while her offspring-island standing next to her is known as Glaros or Glaropoula (sea gull) –a name with an obvious reference to the hundreds of sea gulls that welcome you as you approach-.  In Chania, however, the island of Agios Theodoros is simply referred to as “thodorou”. The island was also known by several other names throughout history, such as Toullouros or Litoa.

In Minoan times, the island was a sacred asylum; In Pre-Christian years, the first Christian temple was built on its land, while in 1574 (Venetian period) the island became a fortress, because of its dominant position. “Thodorou” island changed ‘owners’ many times, until it became part of the independent Cretan State in 1897.

The visit on the island, especially on the north side where the sight of the busy beach is completely lost, seems like passage to another world and another time, when the natural landscape, free of human intervention, was the rule

Today it is one of the few pristine regions left in Crete, spared from the continuous presence of humans, in contrast with the bustling and residentially damaged coast of Platanias and Agia Marina, just 500 meters away from the mouth of leviathan.

Due to the rare fauna it hosts, as well as the sites of archaeological interest, the island is declared a protected nature reserve since the ‘60s, and has become a breeding site for the Cretan wild goat (Capra aegagrus creticus, aka kri-kri) in order to preserve the genetic purity of its population at Samaria gorge. The Cretan wild goat prefers mountainous, rocky areas, steep cliffs and brushwood. It is also very shy, and therefore this small isolated island has become the perfect habitat for them to breed and live in safety, away from the hunters of the White Mountains. Even though they usually avoid people, one of them was there to welcome us as we landed. 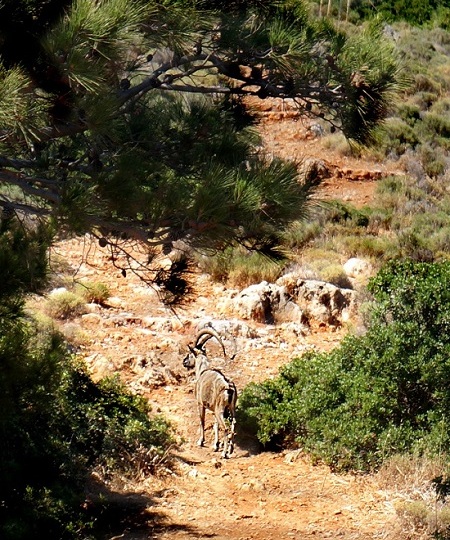 As we approached the island from its southeastern side and landed on the only bay and beach, a sign warned us that we need to stay 100m. away from the shore and landing is prohibited. However, every year on the 8th of June (celebration day of St. Theodore), access and landing is allowed under the supervision of the Forest Authority of Chania.

Around the little chapel, there is a beautiful pine tree woodland. The view extends from the Cretan Sea to the cape and the city of Chania and beyond, until the White Mountains impose a natural limit. As you rest under the shade of the pine trees, in total serenity and indolence, you wish to stay here, on this rocky piece of land, for weeks and months, so far away (and yet, so close) from the millions of visitors, the sound of rackets and the summer beats of beach bars.

Apart from the Cretan wild goat, ‘Thodorou’ is home to several other more or less rare animals and plants; from rabbits, partridges and rats to the migratory hawk ‘Mavropetritis’ (Eleonora's falcon), yet another endangered species, as well as many other migratory birds and sea birds.

About fifty meters east of the southeastern coast of the island, you can see the well-preserved wreck of a German WW2 plane at the bottom of the sea, through the crystal clear waters. The plane was shot down during the Battle of Crete in May 1941. The remains of another German plane were also found of the island.

The visit on the island, especially on the north side where the sight of the busy beach is completely lost, seems like passage to another world and another time, when the natural landscape, free of human intervention, was the rule. The only sound beyond the chirping of seagulls, swallows and other birds, is the persistent splashing of waves on the steep cliffs. If you decide to circumnavigate, swim or reach the island via SUP boards, canoe etc., keep in mind that there are almost always large waves on the northern part, and crossing those waters is only for the adventurous.


* Our visit on and around the island was conducted with absolute respect for this unique natural environment. We approached the coast in silence with SUP boards, and we walked on the island barefoot, so as not to contribute to soil erosion, and without making any noise to disturb the wild fauna. The same efforts, however, are not made by those who approach the island all the time with jet skis and the yachts that moor in the bay with the music at full blast. We hope that the continuous requests to the Forest Authority of Chania and the plans of the Municipality of Chania for “development and tourist exploitation” (the Orwellian synonym of the word ‘disaster’) of the island that were signed last year will be forgotten forever, so that this little paradise continues to prosper for many generations to come.