Crete, a Continent in an Island

A new book by the Natural History Museum of Crete, concentrates centuries of geological upheaval and all the wealth of the island's natural environment

Crete is often described as “a small continent" (a favorite metaphor for us in Cretazine) and one could say that this is just a verbal extravagance deriving from our great love for this place. But now there's scientific background in this extravaganza! 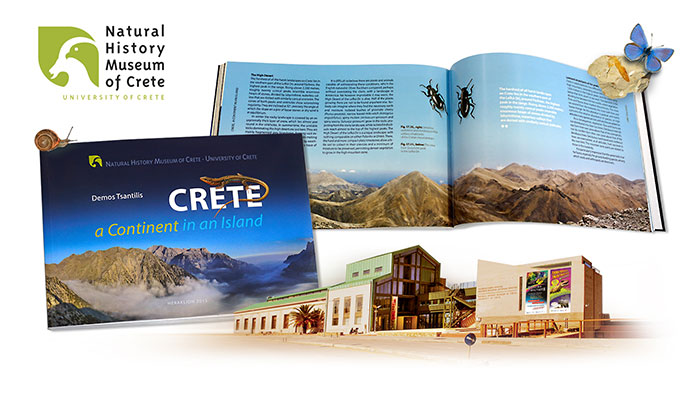 The new publication of the Natural History Museum of Crete bears this exact title: “Crete, a continent in an island” and within its 280 pages it compiles the complexity and uniqueness of Crete’s natural environment and its geological history. The island’s past and modern geodiversity, plants, fossils, animals, caves, ecosystems and the role of the long-term impact of its inhabitants are all analyzed in 21 chapters that also fit more than 350 impressive photographs and illustrations.

This is a work of popular science and a valuable guide for both amateur and professional naturalists. The texts are written by Dimos Tsantilis (and were translated by Ben Petre), who managed to complete this huge essay with the scientific support of the people of the Museum and their personal research that covers a wide range of subjects, from the caves of Crete and bats to the invertebrates of the island, which have been given special attention in the book.

Even the most unsuspected traveler will be impressed by the landscape of Crete that is constantly changing: from the alpine landscapes on the high mountains to the vineyards and olive groves of the hinterland; from semi-desert landscapes in the south coast, to the imposing geological formations of the numerous gorges. On this little piece of land that floats in the Mediterranean there is great geological wealth and the unseen forces that created it; there is the rare biodiversity; and of course there are centuries of human interaction with the natural environment, which became a central subject in the book. Because, Crete is inconceivable without its people, without the civilizations that grew on its fertile land, the numerous invasions and conquerors; and without the small stories of everyday life, which eventually created the essence of the island, as it is explained in the introduction.

The motif behind this great work, as its creators confess, is the “magic spell” that the beauty of Crete has put on them. This is also our incentive to add this book to our collection.