Make your own bread with carob flour

When we heard that the Co-op cafe Ploumi will host our favorite teacher of forgotten grandma recipes and secrets, Mrs. Despina Mathioudaki (who has also taught us how our ancestors made their own soap with olive oil) in a bread-making workshop using carob flour, we signed up without further thought and took the way to Archanes village.

Carob. A tree that grows in abundance in Cretan nature. It provided the raw materials for the “chocolate” of our grandparents and for a variety of food products but also for the industry: its seed was used in film making (before the invasion of digital photography) and it is still used in the manufacturing of x-ray plates, contact lenses, ect.

Its nutritional value, however, is even greater. Carob is very rich in calcium (it contains 3 times more calcium than milk) in vitamin A & B and several important minerals.

Mrs. Mathioudaki also gave us a short introduction and chronicle of the “bread rituals” that once upon a time defined all the important moments of life in Crete; from birth (and the making of a special bread for the woman who just gave birth) to weddings, baptisms and funerals. A special bread or wheat by-product existed for all occasions in the traditional life of rural Crete. In the old times, bread was produced via a time-consuming and difficult process, from wheat planting and harvesting to milling the seed until it reaches the hands of each housewife that kneaded the daily bread; hence its high value and place in life rituals.

All this applied of course before the standardized flour entered our lives with (many, unfortunately) preservatives, as well as the ready-made breads sold at the selves of super markets and bakeries that released us from the burden of making our own daily bread. However, those of us who still have nostalgic memories of our grandmothers kneading and baking bread with pure ingredients, we still yearn for the authentic taste of the warm and fresh homemade bread straight from the oven.

Carob flour, Mrs. Mathioudaki explains, is made by drying the carob pod, removing the seeds and milling the well-dehydrated pod in a mill (a not-so-easy process!). The flour produced has a sweet flavor and the color of cocoa. It is not advisable to use it alone but instead in combination with wheat flour (in consistency 1-1, 1-2 or 1-3) depending on the recipe. The bread we made (recipe follows shortly) is a soft bread with sweet flavor, ideal for breakfast or a snack during the day. 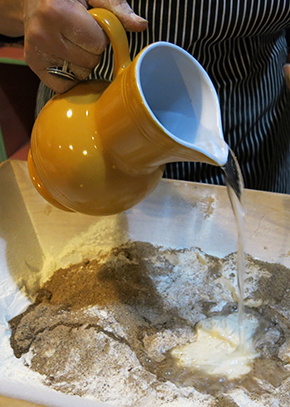 50 gr fresh yeast or 2 sachets of dried yeast (or the equivalent amount of homemade yeast, if you have)

Lukewarm water (as much as needed)

A bit of carob syrup (about a cup)

In a large bowl sift the wheat flour and the carob flour and then mix. Make a hole in the middle of the flour with your hand and add the yeast and then the rest of the ingredients and start kneading. The water should be lukewarm and not hot (otherwise it will “kill” the yeast). The texture should be soft, humid and just a bit sticky (add water as needed to achieve this texture). 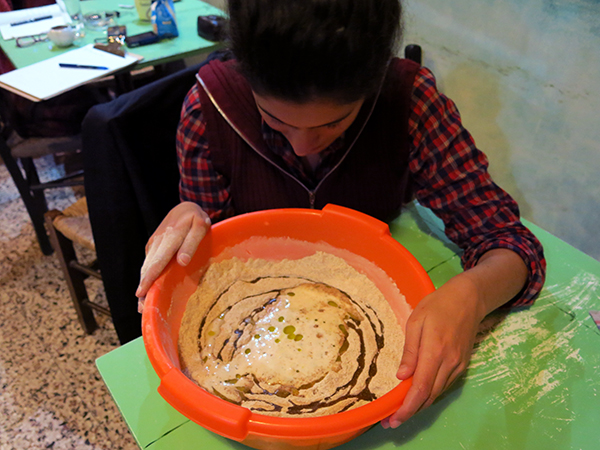 Stella Melina meditates over the bowl before she starts kneading :-)

After kneading well, place the bowl with the dough in a warm corner of the house, covered with a cotton fabric and a woolen fabric or sweater on top, and let it rise. After several hours (or the next morning) you will see that the dough has risen. Knead the dough well again, make your loaves of bread and leave them again to rise. If you want, you can add raisins, seeds, sesame or whatever else your appetite requires. When the loaves have risen, bake them in a preheated oven (200C) for about half an hour.

The house will smell exquisitely and the taste of your bread will be like no other (guaranteed!) Good luck!