Agios Thomas and the City of Stone

There is a village, just half an hour away from the city of Heraklion, that hides a hole that leads to Hades, a sanctuary of chthonic deities, the temple of an Indian prince and perhaps the most important worship center of antiquity in Crete. This village is Agios Thomas, and if you like ancient mysteries and explorations, it will become your favorite destination.

It is not amongst the famous villages of Crete or in the pages of mainstream tourist guides, and even the locals are unaware of the treasures hidden in the village of Agios Thomas: a city carved into the rocks, with a history that starts in prehistoric times and mysteries that challenge the imagination of any visitor. 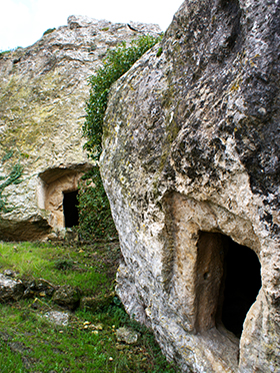 The tour starts south of the modern settlement of Agios Thomas, at the site of ‘Gria Mantra’, where geophysical changes endowed this place with huge, eerie rocks. Six tombs are carved into these stones -that resemble the ones found in the caves of Matala- and an information sign writes that they are “Roman”. In reality, these tombs are much older; carvings date back to prehistoric times, when they were probably used as dwellings.

Walking deeper into the village, you will see the outstanding elementary school, built in 1912, and the majestic three-aisled church of Agios Thomas (the two aisles date back to the 10th century and the third was built in the 14th century). In the narrow lanes of the village you will also find centuries-old temples nestled among the rocks – such the temple of Michail Archangel, which officially dates back to the 12th century, but the visible pre-Christian carvings suggest a more complex history … 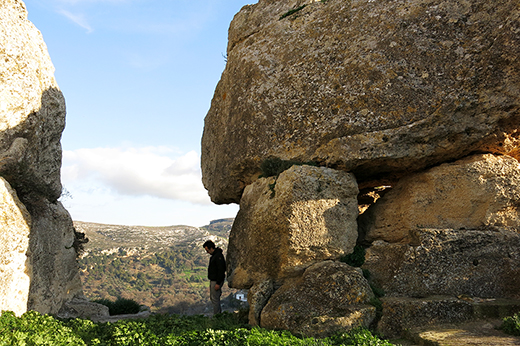 The so-called rider is probably the hallmark of this village, two huge rocks supporting a third one, as if an ancient supernatural hand placed them in this position. And as if this was not enough, a constellation of strange rock carvings add up to the chimerical landscape that takes the imagination to unknown paths. From there, follow the stairs that lead the village cemetery for extra creepiness. Once upon a time, there stood the acropolis of the ancient city (and possibly a fortress in Byzantine times). A few wall sections and traces of a water tank here and there suggest that “something was here”. The view from this point is breathtaking, overlooking the whole region.

The temple of the Indian Prince

The enigmatic monuments do not end here. Walk to the east, leaving the village behind, until you meet the stairs leading to the carved temple of St. Joasaph, a saint with Indian roots. Here myth is intertwined with history: it is said that Joasaph was the son of the King of India Abenner. Despite the objections of his father, Joasaph converted to Christianity and became a monk in the dessert; a story that bears resemblance to the one of the little Buddha. The Indian Prince was actually named Bothisattva, but was later known in Arabic as Budasaf, and then Jodasaf, to end up as Joasaph in Christian faith. It remains a mystery how the worship of Joasaph reached the region of Agios Thomas many centuries ago. The sure thing is that he was soon forgotten, along with his bizarre temple, carved into a huge rock and with an interior space 3.5 meters high. The temple was buried under the ground until it was brought back to light in recent years (after its existence was discovered in church archives), it was renovated and is celebrated annually on August 26.

The sanctuary of Demeter and Persephone, Kera Spiliotissa, and the hole of Hades

We could say that Agios Thomas is something like a ‘theme park’ for the fans of metaphysical theories and paganism. A bit further from the temple of Joasaph you will see another carved temple, ‘Kera Spiliotissa’ (Lady of the Cave), dedicated to Virgin Mary. But strange, ancient traces all around constantly remind you that Christianity is just the most recent settler in this place; a sacred site since prehistoric times. Why? Who knows…maybe because here was the gate to Hades! A hole believed to lead to the underworld in antiquity is now covered with…cement! Perhaps to prevent the exit of chthonic deities?

And this is where legends start: it is said that through this hole one could descent to Hades, and until recently locals threw in there votive offerings or cherished objects of the dead. At midnight, villagers heard a sound coming directly from Hades. It was the sound of a golden lady, weaving on a golden loom; or, according to another version of the myth, it was the golden sow with her 12 golden piglets. This is also said to be the “center of Crete”. In any case, we can’t think of a better place for Hades to build his gate than the unearthly necropolis of Agios Thomas! Ancient traditions relating to the dead survived until the end of the 20th century in the village, as memorial ceremonies with food offerings for the dead took place in this place.

You might not be able to read the ancient Greek inscription, but you might recognize goddess Demeter and her daughter Persephone carved on the rock a few meters east of the temple of ‘Kera Spiliotissa’. The carved inscription dates back to the 1st century AD, in Roman times, and implies that here was a sanctuary dedicated to chthonic deities. Part of the sanctuary today hosts ‘Kera Spiliotissa’; the other two carved chambers west of the temple and two more right across the inscription are worth exploring.

Chthonic deities were worshipped here, and the two nearby water springs were used for ceremonial purposes (one of them is dry today). Even though many parts of the history of this place are still unknown, it is certain that it was amongst the most important worship centers of Crete. Some even claim that here once stood ancient Pannonia, mentioned by Ptolemy – but there is lack of evidence to suggest this with certainty. Another thing is certain, however: this place was continuously a worship center from prehistoric times to our days, from paganism to Christianity. It is said that the wider region of Agios Thomas had 38 churches (today the settlement of Agios Thomas alone has 15). 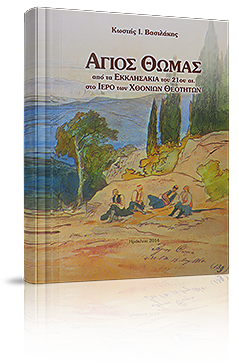 *Many of the information in this article were found in the book of Mr. Kostis Vassilakis, titled “Agios Thomas: from the 21st century churches to the sanctuaries of chthonic deities”.