You’ve seen them in card postals, you’ve read about them in countless travel articles, you’ve associated them with the island of Crete...but when you visit them yourself your great expectations collapse in disappointment!

Famous spots of Crete under the microscope

We are referring to those over-commercialized places whose myth is not always in line with reality. Of course, one could claim, this is true for every touristic destination throughout the world: pictures of specific hotspots are highlighted to attract people, accompanied with luscious descriptions of the great things you will see and do there. We, however, are here to tell you exactly how things are!

The myth of Anogeia is built around its great history during the Battle of Crete, since this village was the centre of the resistance on the island. That, however, had a tremendous cost on the inhabitants, as the Germans literary left the village into rubbles, executing the men and burning down the houses.

The other reason why this place is famous is because of the great artists who were born here, such as Nikos Xylouris (aka ‘the Archangel of Crete’), his brother Psarantonis, Vasilis Skoulas, and an endless list of other artists that left a great cultural heritage behind them. 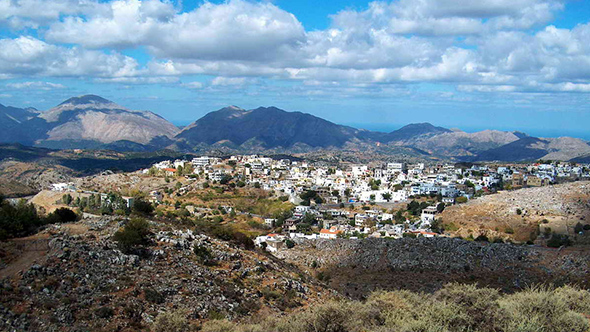 After the continuous destructions, the reconstruction of the village did not respect the traditional character of the place. Thus, do not expect to see any picturesque traditional houses and narrow lanes, but instead be prepared for city-like apartment buildings set on the chaotic settlement.

For the food, definitely! Try the delicious local specialties, such as lamb ofto (slowly cooked next to the fire), spaghetti cooked into the lamb or goat broth, anthogalo (creamy cheese) and mizithropitakia with honey (pastries filled with mizithra cheece). Needless to say this is not the best place for a vegetarian, or even worse, vegan visitor, but still there are options as mountainous villages also offer a variety of vegetables and wild greeneries with olive oil and lemon, depending on the season.

As a bonus, you will enjoy your food in taverns with fireplaces and windows with a view! The sight of Psiloritis –the highest summit in Crete- is breathtaking, especially during the winter when it is covered in snow.

Don’t forget to stop in one of the coffee shops on the main square to try the village’s famous galaktompoureko (cream filled pastry).

Here you can also visit the coffee shop which once was the house of Nikos Xylouris, in case you are a fan of his music.

The mountain of Psiloritis is excellent for trekking, especially the plateau of Nida, and for exploring imposing caves such as Ideon Antron.  And if you are here in the summer you will want to experience the unique festival of Yakinthia (usually organized in July), set high in the mountains a few kilometers uphill from Anogia, where you will be initiated into the secrets of Cretan music and culture. In any case, Anogia will be your mandatory stop for food or coffee.

Finally, when you visit Anogia you might always bump into one of the “famous” wedding celebrations of the region, that almost always take place in the village square and the entire village is invited (you too)!

A traditional fishing village, set on a beautiful cove, surrounded by ancient caves carved into the mountain….this is what the hippies found once upon a time, and came to inhabit the caves with their guitars and outrageous (for the locals) outfits, bringing their psychedelic subculture to Crete! Bod Dylan, Janis Joplin and Cat Steven passed by here, among others. The villagers didn’t know what hit them! But soon hippy culture was accepted and eventually became the reason for an economic boost and growth of the tourist industry in the region.

The hippie settlers became the emblem of Matala, and since then the village is romantically associated with the époque of flower children, careless living and “make love, not war”! 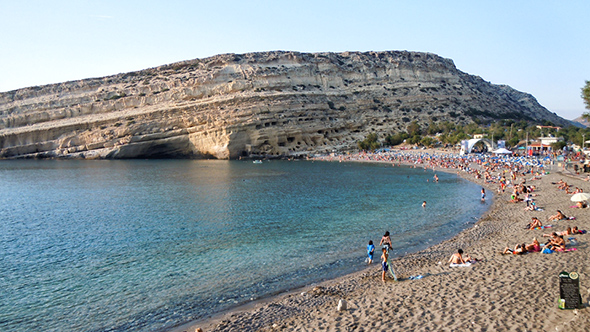 The beautiful landscape of Matala is not a myth. The settlement, however, has the tourist aesthetics of past decades. Bars, taverns, cafeterias lined up in front of the sandy beach, without any logical order or traditional character. The settlement is full of standardized souvenir shops, hotels, greek souvlaki and so on! Despite the hippy past, free camping and nudism is not allowed in Matala; however, there is an organized camping site just by the beach and hippy artisans still gather there to sell jewelry, handmade gifts and other stuff on the beach.

The impressive caves of Matala are definitely worth visiting, and you might even discover some drawings of “flower children” on their walls. The sunset in the cove is wonderful, best enjoyed with a cocktail in one of the bars by the sea. Plus, some new stores and bars are trying to give a fresh perspective in the village.

Finally, Matala is a great base to visit nearby beaches, such as Komos, an unorganized sandy beach that stretches for more than 2km and is a popular destination for campers, nudists and neo-hippies, and the more quiet beach of “red sand” where you can easily go on foot from the village.

A favorite destination for the international jet set, including Hollywood stars, super rich Saudi princes and so on! The myth of Elounta carries images of luxury that have taken large (and misleading) dimensions.

All these jet set people might be regular visitors of Elounta, but don’t expect to see them or anything that resembles their extravagant lifestyle, as they spend most of their time ‘barred’ behind the great walls of luxurious resorts, set on the slopes of the Mirabello cove. In other words, luxury goes with luxury. The settlement of Elounta itself is friendlier to common people and far from luxurious! It is still quite touristic though, with souvenir shops, taverns and ferries transferring tourists from the small port to Spinalonga and nearby beaches. On the downside, the famous resorts have made most beaches “private” and it is difficult to find a descent beach to swim. The pebble beach of neighboring Plaka is probably the best one. 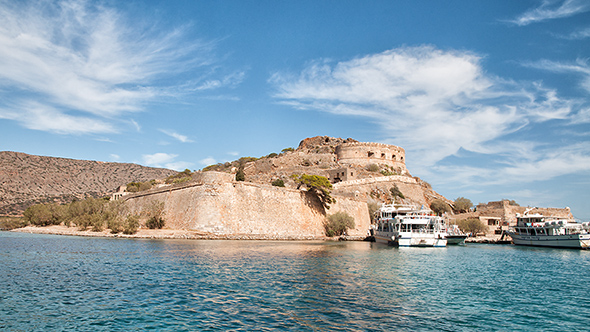 For the panoramic view to the cove as you head downhill to the settlement of Elounta. Visiting Spinalonga with one of the ferry companies is a must (we suggest avoiding the ones offering tacky tourist packages with loud cheesy music on board and BBQs). In Elounta you can visit the settings of the tv series “The Island”, based on the famous novel of Victoria Hislop. Part of the settings is still found in the village of Ano Elounta (just a few kilometers uphill from the port of Elounta). The book itself is a great summer reading before or during your stay in the region. Based on true stories, when Spinalonga was a leper colony, the book will definitely enhance your experience and you will be touched when you find out how different life was in the area just a few decades before it becomes a popular tourist resort.

It is also worth visiting the tied island of Kolokytha where 1-2 small sandy beaches exist on its eastern side, surrounded by a wild Cretan landscape.  And of course, don’t forget to visit Plaka, a quiet picturesque fishing village with interesting small stores, fish taverns, a lovely pebble beach surrounded by high mountains, and a beautiful view to Spinalonga. We actually suggest you find a hotel there, if you are planning to spend some days in the area.

Hersonissos and Malia were the “hottest” place to be in Crete during the ‘80s. Tourist packages promised wild nights and non-stop partying until morning, making these two tourist villages the ultimate summer destination for careless holidays –mainly for foreigners. North-western ladies were falling under the “spell” of “greek kamaki” (which basically means “chick fishing”, with a harpoon to be precise, referring the unique Greek flirting style!), money and alcohol was plentiful and everybody was happy!

During the past years, decadence has arrived in these two popular party destinations.  The “quality” of tourism has dropped dramatically for the standards of average people.  Most restaurants and bars still carry the negative fame of being “too touristic”, with doubtful quality of alcohol, attracting a young crowd that has as sole purpose to get wasted beyond limits! Stories of crazy tourists doing unspeakable things on the streets of Malia and Hersonissos are often on the Greek news! And it wouldn’t be an exaggeration to claim that it is a bit dangerous to walk around in Malia during summer, since half-naked and often drunk tourists drive around like crazy with ATVs!

Hersonissos still offers nice sandy beaches, especially the ones west of the settlement (known as ‘limanakia’) that are quieter and clean and also attract locals from Heraklion who come here for their afternoon swim. There is even a small beach for nudists. The sea promenade of Hersonissos is still a pleasant place to take a stroll and discover some new restaurants and bars that make good efforts to reverse the negative stereotypes that hunt the place.

The village of Ano Hersonissos still preserves its traditional character and has not been too damaged by the rapid growth of the tourist industry in the region.

You can also visit the picturesque village of Koutouloufari to enjoy a panoramic view with your drink or lunch. The settlement of Malia has still preserved its traditional neighborhoods, with pebbled alleys, old churches and family restaurants, all hidden behind the flashy tourist streets.

And of course, if you don’t care about sightseeing, traditional stuff and nature but your wish is to spend your holidays soaked in cheap alcohol and party like there is no tomorrow, Malia and Hersonissos is still the place for you!