Snowkiting and kitesurfing in Crete

A French snowkite champion and a French professional photographer experienced snowkiting and kitesurfing in Crete, struggled with strong winds and the rocky cretan mountains and had a blast with cretan hospitality!

Written and illustrated by Bertrand Boone

For most people, Crete is before all synonymous with holidays, sun and sea; but very few people are aware that snow-capped mountains can be found on this island situated in the South of Greece. The first time I had heard of that place as snowkiting destination was in 2009 through our friend Vassilis, when we had a memorable kiting expedition with Fabio Ingrosso in the North of Crete. Four years later Johann Civel and I had the opportunity to discover the island of gods.

It’s rather difficult to reach Crete from Lyon in the middle of winter for most direct flights are operated only in summer. This is  why we flew by late January - via Amsterdam! - to Athens and then Heraklion, the capital of the Island.

When we arrived, we were heartily welcomed by Costis Charalampakis, our correspondent there. Costis, a native of Crete, knows the island like the back of his hand and practices snowkiting -something quite unusual here! We loaded all our equipment at the back of a four-wheel Ford we had rented for the trip. We quickly left Heraklion to reach Aghia Pelagia, a small seaside resort 17km from the airport, where Costis’s family owns a magnificent villa on a hill overlooking the sea; luxurious surroundings, a good start for our stay! One must know that in Crete hospitality (philoxenia) is of utmost importance and we realized that throughout our stay. We studied the maps and had a look at the weather forecast while tasting regional specialities among which a delicious moussaka, a dish made with aubergines, minced meat and béchamel sauce, kindly cooked by Costis’s mother. After a few glasses of raki, a brandy 40 degrees proof, we went to bed looking forward to the following day and our first kiting experience in Crete! 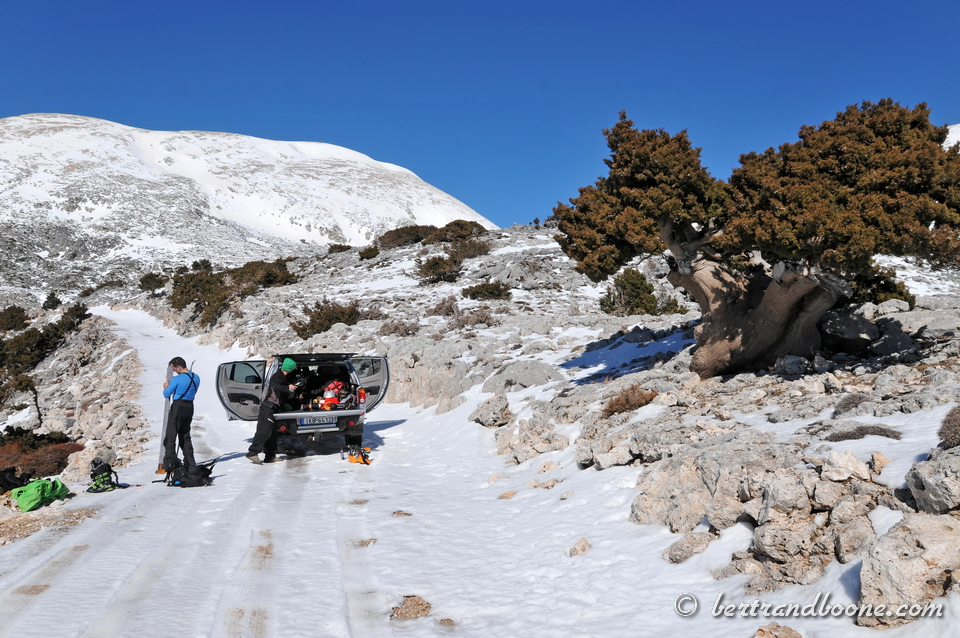 When we woke up, the weather was bright and windy as it is often the case on this island. For Johann and I, who were in the Alps 24 hours before, it was great to wake up at the seaside; the temperature at the end of January was ideal, 20 degrees, no need to scrape the winsdshield! It was rather strange to prepare our skiing equipment in such a place; the snowcovered summits could be seen in a distance. We were lucky for there had been a heavy snow fall a week before.

Crete is a mountainous island, like Corsica. Three great mountain ranges tower above the island: Lefka Ori (2453 m) or 'White mountains' in the West, mount Psiloritis (2456 m) or mount Ida in the center (the highest in the island) and mount Dikti (2148 m) in the East.

We took all our ‘toys’, skis, surfs and kitesurfs. It took us an hour drive on a very winding road to reach the mountains. We crossed very beautiful landscapes; instead of forests we saw olive trees everywhere, small white chapels and nice perched villages. It was not easy to find the track to reach the center of the massif but fortunately Costis was a good scout. We had a four-wheel drive but without winter tires we had to stop as soon as we reached the snow; it did not matter for we were almost there. With seal skins we reached Mount Psiloritis in 15 minutes. We had a nice wind and the snow was powdery; that was great! Johann took out his 9 m Ozone Frenzy, I took out the 7 m, and Costis took the 10 m. The landscape was ideal and we enjoyed ourselves at the foothill. We started the ascent but there the wind was much stronger, a good 35 knots! Half way up Costis and I began to get beaten up, the ascent was too steep for us and we decided to get down. Only Johann continued; he got into the corridor at mach 12 (Duska corridor) and reached the top of Mount Agathias (2424 m) in a few minutes. From there Johann could see the sea on 360 degrees. He was like mad when he joined us at the bottom after a great descent in the powdery snow. Costis is baffled; he didn’t think it was possible to ascend so quickly with a kite. Furthermore it was a big First for Johann to reach the top of the “local Mt Blanc” with his kite. We stopped at the bottom in a kind of fort altered into a shelter for shepherds to have a snack. Johann took advantage of the situation to jump over the roofs and it was night when we got back to the car.

As we wanted to explore Lefka Ori the day after, we spent the night in a great lodge, at Anna and Antoni‘s, Agios Ioannis lodge, near the village Anopoli, in the Sfakia region. There too we had a very hearty welcome with the inevitable raki!

The White Mountains or Lefka Ori covers a large part of Western Crete. They are made of limestone and called White Mountains because they are covered with snow until late spring. In summer the sun is reflected on their limestone summits and so they seem to be white again. There are more than 30 summits that reach 2000 meters at their highest points and about 50 gorges, the most famous being that of Samaria. We penetrated into the heart of the Lefka Ori mountains on a long trail in a bright sunshine, until we were stopped again by the snow. We put on the seal skins. The landscape was very craggy but the snow was frozen and less abundant than the day before on Mount Psiloritis. The higher we climbed, the stronger the wind was; in some places it was even difficult to stand still. After a two-hour walk we had to accept it: it was impossible to kite with a 40 knot wind and a landscape strewn with rocks. It was a pity because the place was boundless and diverse. Back to Aghia Pelagia, our base camp.

The day after the weather was still very good. We decided to go kiting on water, at Matala, a resort situated in the south of the island. Matala is known for its artificial grottos dug during the neolithic period in the cliff of the bay. In the sixties the grottos became shelters for the hippies. Every year now, in May or June, a rock festival takes place there, the “Matala beach festival”. But at the end of January the place is deserted, not a soul can be seen! Johann got into the water with his 10 m Ozone because of the weight, he couldn’t bring his tube sail but that was not a problem for Johann who feels as easy on water as on snow; he went kiting on that superb bay for about 2 hours. 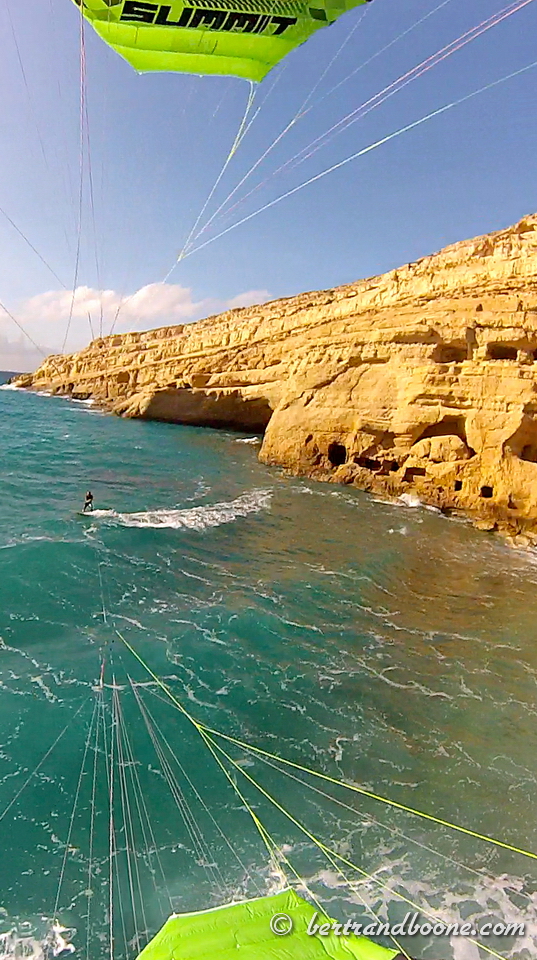 By the end of the afternoon, we headed again towards the Psilotiris but on the South face this time. We walked up a trail full of potholes to the hut “Toumbotos Prinos” located in an altitude of 1500m. On the way, in the middle of nowhere, we found a company of shepherds and asked them if we are on the right track. The shepherds were very kind and invited us to share their meal. There were about 15 of them having a great time around a barbecue. The rosé and the raki flowed like water; what a rave up we had! That was much later at night that we managed to reach the refuge...

When we woke up, the weather had changed: the sky was overcast and it was very windy; we could see the clouds stream over the mountains at a terrific speed; nevertheless we walked for an hour on the European hiking trail E4. On the way we met 2 hikers, twins, who started their walk early in the morning had tried to climb up to the top. They persuaded us not to go on for it was like hell over there, they said; even with their two ice axes and their crampons, they had not been able to remain standing. We walked down with them. They kindly invited us to spend the night in their house. As we wanted to try again the day after, we accepted.

Johann got to the top of the highest mountain in Crete: Mount Timios Stavros (2456 m) and immortalized the moment with his Go Pro.

When we woke up the weather was better. Janis, a friend of Costis‘s who knows the region well joined our company. We took a different way this time. After an hour, Johann decided to take out his kite, the 5m. The wind was very strong, more than 40 knots; Costis and I didn’t feel like going. In a few minutes Johann had dwindled to a tiny speck in the middle of the mountain; Janis who had never seen a snow kite was surprised at seeing someone climb up so quickly. I deeply wished I had been able to go kiting but the weather conditions were far too bad; I went on with my seal skins for the landscape was superb and I really wished to take photos. 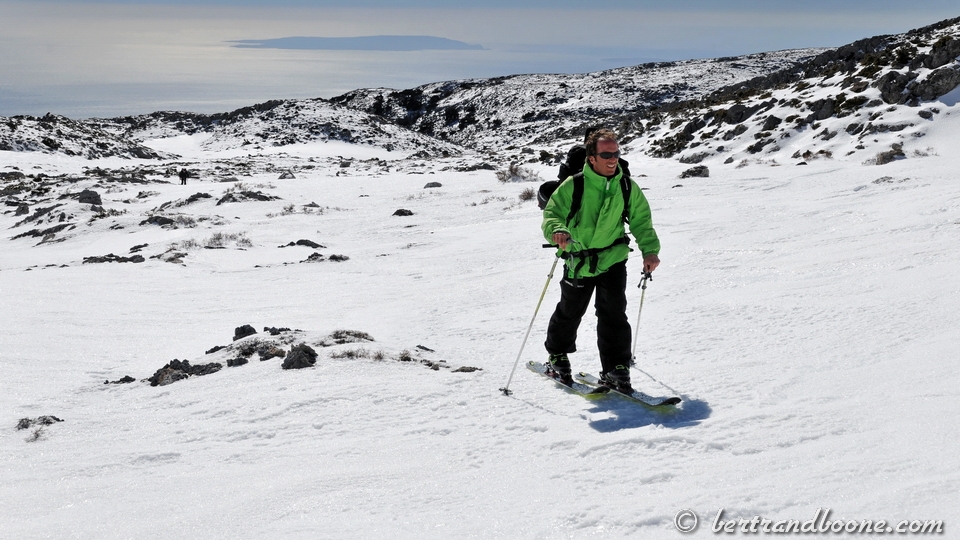 Half way up, Johann joined me; I clung behind him and climbed at full speed, pulled up by the 5 m. We stopped at a short distance from the top and took a lot of photos. In the heat of action, Jojo decided to get to the top alone which he reached in a few minutes by following long ridges; the sea could be seen on each side, that was superb. He got to the top of the highest mountain in Crete: Mount Timios Stavros (2456 m) and immortalized the moment with his Go Pro. When he came back, Johann told me he was really happy to have his 5th line that showed really efficient to stop safely. We had a long run down on spring snow. We met Janis who, was excited and said to Johann he had one more big First with his snow kite.

We spent the night at the sea side. Johann went kiting on water at Kokkinos Pyrgos with a background of snow-capped mountains in the sunset. Then we came back to our base camp.

The day after we went back to Psiloritis on the North side as we had done on the very first day, but unfortunately the wind was not blowing.

The last day had arrived. Janis invited us in a very good little fish restaurant in the suburbs of Heraklion. Until the end of our trip we appreciated the kindness and hospitality of the people of Crete; great thanks to them, especially to Costis without whom the trip could not have been organized.

Now that you've read it all, watch the video: