The feeling that overwhelms you when you stand on the top of Kofinas, gazing at the endless view of the Libyan Sea from one side and the Cretan mainland from the other, cannot be easily described. The horizon line is lost, dissolving into the blue sea, and you feel like a little god (even though you're just 1231m. high) ruling the coast of Ai Giannis and Koudouma Monastery down below. Instinctively you will have the urge to open your wings and fly, like another Daedalus, envious of the birds of prey that fly over and around you. 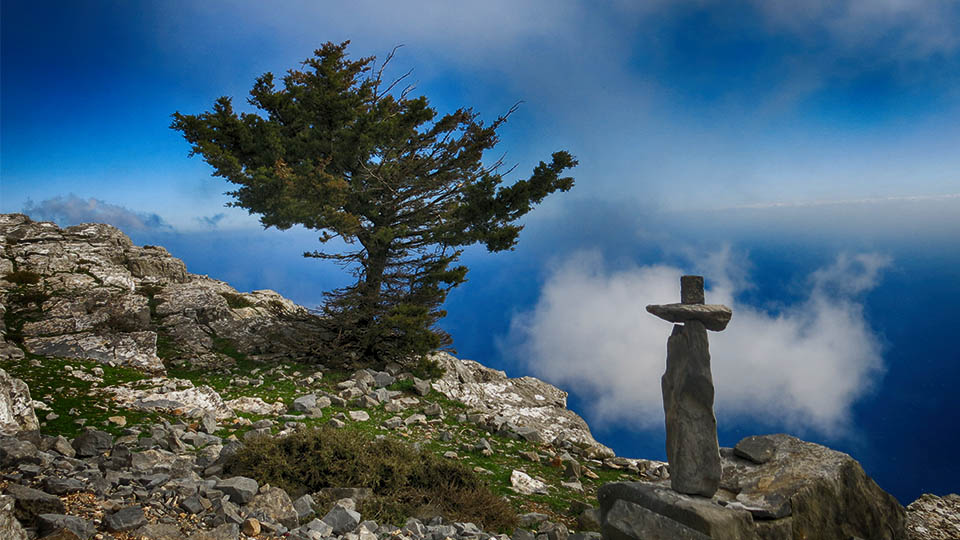 Minoans found here the perfect spot to establish the highest summit sanctuary of Crete. The sanctuary remained a site of worship until early 7th century AD and was later 'converted to Christianity' together with the island population. At this time, the stone made chapel of Timios Stavros (Holy Cross) was built. Nevertheless, ancient practices are not easily forgotten. On September 14, the celebration day of the Holy Cross, a pagan ritual of tree worship revives at this site. Believers pick 'apples' (militses) from three 'holy' trees located at the northern slopes of the mountain, the priest blesses them and then they are distributed to the people as communion. Interesting, no?

The sure thing is, this is indeed a holy mountain. You just feel it in the air, in your skin, everywhere. And it is once again proven, the Minoans knew what they were doing!

Back to earth now...walk down the trail - which is not literaly a trail but rather a carved staircase on the rocky cliffs, and take the dirt road that leads to the village of Kapetaniana.

The ancient monastery in Lousoudi

The view from the top of Kofinas continues to haunt you as you walk back to the familiar dry landscape of Asterousia. The always-present goats are the most common sign of life in this infertile landscape.

When you reach the site of Lousoudi, however, you should know that once upon a time there were many signs of life and civilization here! Specifically, here once stood an important center of education and philology, which was even called "the first Greek University" by some (an exaggeration, of course!). It is a ruined monastery, excavated a few years ago. It was founded in the 14th century by an intellectial monk, Joseph Filagris, who came here to teach greek philology, religion, mathematics and even started a bibliographic workshop, producing copies of important manuscripts, parchments, religious scriptures and texts of ancient writers, with a preference to Aristotle. If you visit the excavation you will see the floor plan of the Monastery, including monk cells and the unique scriptorium. The little stone made temple stands here for centuries, with his arch followng the curving line of Kofinas in the background.

And there, the temple and the summit of Kofinas seem like one, completing each other naturally under the warm southern light...