You are here:Polis • Life in the city • City Routes
CRETAZINE

A walk in Agia Triada

Just a few steps away from the busy central market of Heraklion there is another city center, forgotten and ignored by the state authorities for a long time now. However, the district of Agia Triada, once known as “Kizil Tabia”, is one of the best preserved parts of “the old Heraklion” with traditional houses, monuments and narrow lanes.

Agia Triada is ‘surrounded’ by the coastal road and esplanade of Heraklion and the busy streets of Kalokerinou, Giamalaki and Arch. Makariou.  The picturesque houses with the interior gardens are also “surrounded” by the cement and graceless apartment blocks of the city. Within its borders you will see village houses from the Ottoman period with interior gardens, Venetian fountains, the oldest Armenian Church in Europe, the multicultural community of Heraklion (as many immigrants, Roma people and descendants of Minor Asia refugees live there), kids playing in the streets and lots of stray cats! This is the “other” center of Heraklion, hiding an “invisible city” with deep roots into history.

The proposed walk is part of a city tour organized by the Association of Archeologists and Architects that took place in 2012. We provide you with the key-points on the map so that you can improvise your own route and, by all means, let yourself get lost in this urban labyrinth, full of nostalgic images of the past.

We suggest you start your walk from Kalokerinou Avenue that divides the modern city with whatever is left from the historical district of Agia Triada. In Venetian times, when Heraklion was known as Candia, the street was named Strada Larga (Long Street). It started from Piazza delle Erbe (near the lions square) and ended in the Gate of Pantokratoras (Chanioporta). It later took its Turkish name from the Mosque that was once located here: “Kethounta Zoulfikar Aga Carsisi”. A small arch in the middle of the street once divided the businesses (mostly coffee shops) owned by Christians from the ones owned by Muslims.

Turn down Giamalaki Street (Γιαμαλάκη) towards the sea, and from there you can walk to the noble house of Bey Shekeria and Priuli Fountain or you can choose to enter the narrow lanes of Agia Triada district. 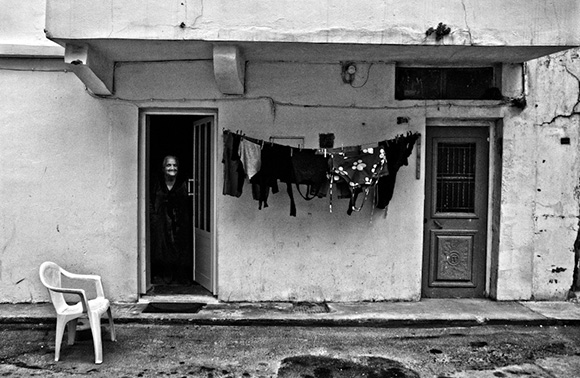 Going down Giamalaki Street, the teeny tiny lane that leads to the noble house of Bey Shekeria is the last one you will meet on your right before you arrive to the primary school and the seaside. This house is one of the hidden treasures of the city, a characteristic example of Balkan architecture with many neoclassical elements. The chances are that you will not be able to see the wonderful interior since it’s a private property, but you can still admire a view to the garden and the old fountain. We can at least tell you that inside the house there is an old hamam, majestic high-ceiling chambers, wooden staircases and large windows.

The fountain you see took its name by General Provisioner Ant. Priuli and was constructed during the last years of the Venetian rule. Venetian Candia suffered from water shortage since the day the Ottomans cut off the pipe of the Morosini Fountain (Lions’ Square). This issue was resolved when Priuli found a water source within the trench and managed to channel the water to the fountain, constructed for this purpose. It is a monument with renaissance, ancient Greek and Roman elements bearing a more recent inscription with the name of Houssein Hajji Pasha, the man who took care of the water flow restoration in the fountain. Today Priuli Fountain is once again renovated and we hope that it will soon be more advertised, as many (even locals) are unaware of its existence. 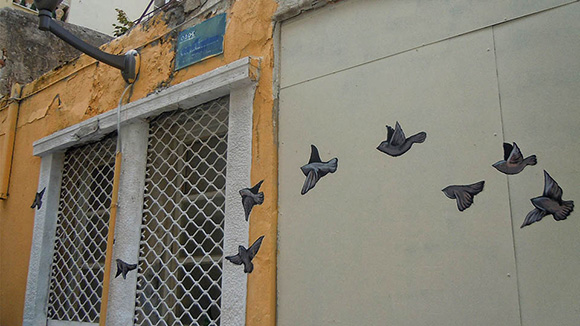 This long and quiet street once was one of the most vivid marketplaces in the city and today a good starting point to enter the labyrinth of Agia Triada. The colors and paintings you will see on the old buildings is what is left from a mini-renovation organized by the inhabitants and a local free press newspaper (‘Monitor’) in March 2011.

Forgotten and neglected, this fountain might not catch your eye as you pass by it. However, this is one of the first Ottoman fountains constructed in the city. Located right on the corner of Ntentidakidon & Palmeri Street, its official name was not preserved. Right across it there once was a historical bakery of the city, which closed a few years ago: the bakery of Hajji.

In this narrow lane near the central street of Kalokerinou stands the oldest Armenian Church in Europe, the center of the notable Armenian community of Heraklion. It was established as an Armenian Church during the time of the Ottoman rule (it was bought by a rich Armenian merchant from its Turkish owners). During the Venetian period it functioned as an Orthodox temple and was known as ‘Agios Georgios of Dorianon’. The only part preserved from this period is the southern door of the temple.

It is not exactly a square, because it was never used or modified as such. If you use your imagination to ‘delete’ the parked cars, you will see an open space within the heart of the old neighborhood, with trees and children playing carelessly, open air markets and the 19th century houses in the background. Its first (and to this day only) modern use as a square was in the summer of 2012, when an open air concert by the Municipal Philharmonic Orchestra, an art exhibition and DJ party was organized in the frame of the ‘Invisible City’ activities– one of the best parties we have experienced in the city.