Ziros Plateau - Into the time machine

Lassithi is one of the less travelled and yet most beautiful regions of Crete (perhaps exactly because it is less travelled!) and the Plateau of Ziros is definitely one of its hidden gems. The route we propose starts from the town of Sitia and ends at the remote beaches of Xerokampos, known for their exceptional wild beauty. The road crosses the scenic plateau of Ziros, in an altitude of about 600 meters.

Medieval villages and wild nature in all its majesty...

Most settlements set on the plateau of Ziros preserve excellent architectural elements from the Byzantine, Venetian and Turkish period. Scattered around the plateau these villages will soon be deserted, as young people move to the cities or abroad. The remaining inhabitants, most of which are old, maintain a lifestyle that brings back images of past times. Old men hang out in the local cafes from early in the morning till late at night, drinking their morning coffee and evening raki, watching tv or listening to the radio, talking, or just sitting in silence, gazing at the street. They narrate stories that bring images of a once-upon-a-time flourished place, when weddings and feasts lasted up to 3 days and people danced tango to the sound of violins. If you have the chance to sit back in one of the small village cafes and talk to the old people you will hear many wonderful stories about unique religious festivals, the way they were flirting with the girls, about magical and pagan practices, their local traditions and “savoir vivre”, about the pirates and Barbarossa who hid treasures on the island of Chryssi (aka, gaidouronisi, meaning, “donkey island”) and the many civilizations and cultures that passed by this region through the centuries and left their stigma in the present.

Located 147km east of Heraklion, Sitia is probably the less touristic town of Crete but still has a lot to offer. First of all, it is your "connection" to some of the most beautiful places on the island, such as the palm forest of Vai, Toplou Monastery and the lovely beaches of Zakros and Xerokampos. Then, you can find numerous cafeterias and taverns lined up by the peaceful harbour-side promenade, as well as good quality hotels. The main attraction of the city is the 13th century Venetian fortress of Kazarma (from the latin Casa di arma, "the guard barracks") overlooking the harbour.

So, after enjoying a short walk on the harbour promenade and maybe taking a bite in one of the seaside taverns, you can now start driving towards the plateau of Ziros. Follow the signs to Ierapetra and Ziros until you meet the intersection to Ziros on your left. 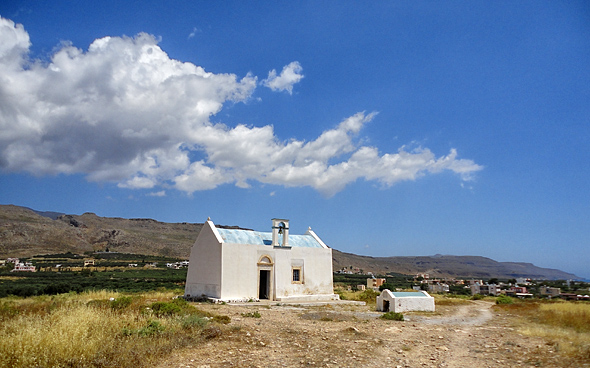 Driving towards Ziros you will meet the small deserted settlement of Etia to your right. Etia was built during the Venetian period and the settlement is first recorded in 1577. It had about 564 inhabitants and it was the most populated village of Sitia district. The most prominent monument of the village is the Villa Dei Mezzo. It was founded during the Byzantine period but flourished during the Venetian period when it was the feudal property of the family Dei Mezzo. In the entrance of the three-story villa there is still the Dei Mezzo inscription "INTRA VOSTRA SIGNIORIA SENZA RISPETTO" which basically means "enter without shame"! Two other important monuments of Etia are the churches of Agia Ekaterini and Agios Ioannis Theologos. 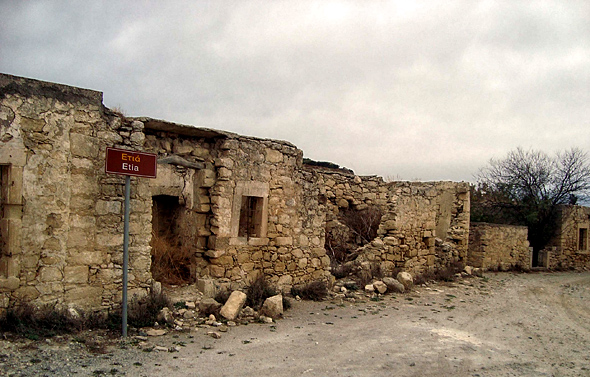 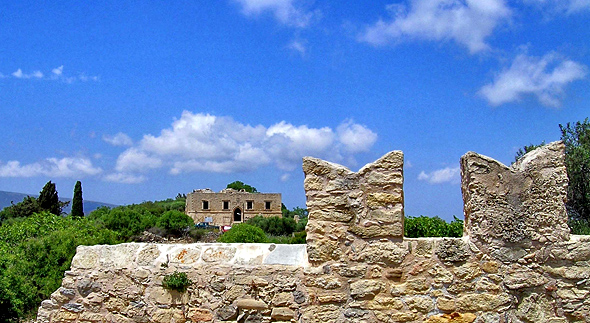 When Crete was occupied by the Turks the villa became the property of the Turkish ruler Mehmet Aga and Turkish dignitaries settled in. When the Turks surrendered, the villa was destroyed and looted by the Christians - who really hated the cruel and vicious Mehmet Aga who reportedly "corrupted" at least 100 Christian virgins (among others)! The villa Dei Mezzo is considered the greatest private habitation of rural Crete and one of the most important buildings of its kind in southern Europe.  It was recently renovated but only the ground floor is preserved in a very good condition. The villa is brought back to life at least once a year, during the Dei Mezzo Music Festival in June.

Sit back in one of the small village cafes and listen to the old people's stories about unique religious festivals, about magical and pagan practices, and the pirates and Barbarossa who hid treasures on the island of Chryssi

Each Cretan village has its own story of origin, sometimes encompassed in its the name. The village of Armenoi (meaning, Armenians) was named after its first inhabitants, who were Armenian soldiers from the Army of Nikiforos Fokas. The village is located a few kilometers after Etia, surrounded by gardens, fields and charming watermills that still function. The main sights around the village include the church of Agia Sofia, which used to belong to the notable monastery that flourished in past times, bearing the same name, and the cave of the "Agio Pneuma" (Holy Spirit).

Continuing towards the village of Ziros you will meet the village of Handras where the deserted medieval settlement of Voila is located, just 1 km north from the settlement. Voila is one of the most notable villages of the period featuring a ruined medieval tower (built in 1740-1741). Another important monument of the settlement is the church of Agios Georgios. There you will also find two old fountains with spring water. Voila is where the family of the Greek national poet D. Solomos originated. 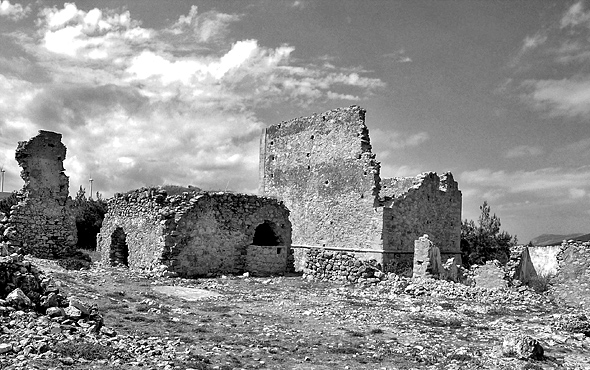 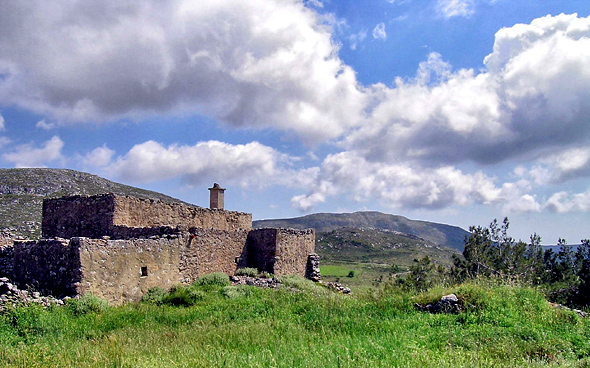 Ziros is the main and most populated village of the plateau where you can also find several cafes and taverns. The area is famous for its wine and raki production so you if you find local producers we suggest you do some shopping (and if you run out of cash, don’t worry, there is an ATM machine in the village)! The settlement’s pre-hellenic name is a testimony of its long history, along with the antiquities found in the area from different historical periods.

Park your car and discover the village monuments, such as the exquisite Byzantine frescoes in the churches of Agia Paraskevi (where the bones of rebels slaughtered by the Turks are also held), Agia Eirini, Aghios Georgios and Aghios Nikolaos, dating back to the 14th and 15th century. 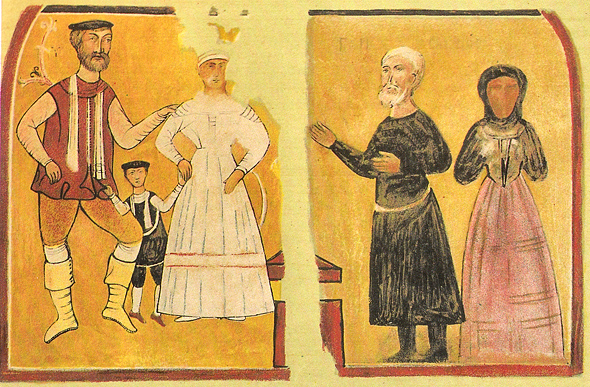 Leaving the plateau of Ziros behind the descent towards the coast starts. On the road you will enjoy a spectacular view of the Libyan sea and in about 30 minutes driving from Ziros you will arrive at the village of Xerokampos. On the way you will see the dramatic gorge of Ziros, known as the driest gorge of eastern Crete. If you wish to walk through the gorge you will need approximately 2 hours. However, as you also need to walk back and there is no shade in the gorge, we suggest you leave this for another time and continue driving towards Xerokampos. After driving and sightseeing for so many hours, you will be thrilled when you see the turquoise waters of Xerokampos beaches! We suggest you spend the rest of the day here, or even stay in one of the hotels or in your tent/sleeping bag for a night (or two, or as many as you need!) enjoying the peaceful atmosphere of the place and exploring its unique beaches and biotopes. In the village you will find several rooms to rent, mini markets and taverns. When you feel ready to go, you can either drive back to Sitia from the same road, or alternatively from the road that passes from Zakros, which is another beautiful place worth visiting. Another option is to take the road to Ierapetra from the plateau and continue exploring southern Crete. The choice is yours!