You are here:Polis • Life in the city • City People
CRETAZINE

Gareth Owens & the secrets of the Disk of Phaistos

Every year on the 3rd of July you will find him enjoying a cup of coffee at the same place: the palace of Radamanthys in Phaistos. This is his way to celebrate the day when the Disk of Phaistos was found. And why wouldn’t he, as for the past years he has dedicated countless hours in researching and deciphering the scripture on this mysterious disk. Gareth Owens talked to us about his personal work with the passion of the devoted researcher, he linked the disk of Phaistos to…Patti Smith (this punk poet must have a relation with sign 2 on the disk, “the punk head”, he says) and gave us an antidote to our national depression in times of crisis, as a gift.

It all started in 2008, when an American researcher claimed in a scientific conference that the Disk of Phaistos is not original or even Minoan. That annoyed Gareth, who had already proven with his dissertation that the Minoan language belongs to the Indo-European family. Together with John Coleman, an Oxford University professor, they joined their ‘academic superpowers’ not only to prove that the disk is original, but also to decipher its scripture. Today the two scientists claim that they are able to ‘read’ 80% of the disk using Linear B as a tool, which was deciphered by their ‘hero’, Michael Ventris in 1952. And this is how the great riddle of Minoan Crete, one of antiquity’s x-files – according to National Geographic- is closer to its solution than it has ever been. 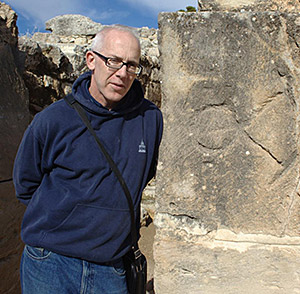 Gareth Owens, a Welsh and British (and not English!) living in Crete for the past 25 years, welcomed us to his office in the Technological Educational Institute of Crete where he works as a coordinator of the ERASMUS program and talked to us with enthusiasm about his research, trying to simplify the scientific information and provide us with comprehensive answers, as in the beginning everything seemed like ‘Minoan hieroglyphics’ to us!

How much progress has been achieved during the past few years to understand the scriptures on the disk of Phaistos?

The progress has not been dramatic; however, we have conducted a very systematic work. Together with John Coleman in Oxford University we now completely agree on the meaning of 80% of the Disk signs and we “somehow” agree on the 15% while we have no clue for the rest 5%, as it has no resemblance to any other existing script to use as a reference.

What does it mean to be able to read 95% of the Disk of Phaistos?

It means that we can spell it using the phonetic values of Linear B, which was deciphered by Ventris in 1952.  In other words, we know how it is read and how it sounds! It is like reading a Turkish newspaper: you don’t understand what it’s saying, but you can at least read it and ‘catch’ the meaning from some words you may already know.

How is it possible to use a subsequent language (Linear B) to read a more ancient one, like the Minoan hieroglyphics of the Disk?

This is possible with the method of comparative glossology, which has many things in common with evolutionary biology– that’s why when my mind is ‘stuck’ I talk with the folks working in the Museum of Natural History. It is like linking the pieces of a big puzzle. Together with John (Coleman) we concluded that we must not disassociate the Disk of Phaistos from the wider context it is part of, which is the Minoan civilization. We compared ‘parallel texts’ and assigned to the disk’s signs that were also found in Linear B scripts the same phonetic value. For example, the ‘punk head’, as I call it, is the same in both scripts and therefore should have the same phonetic value. 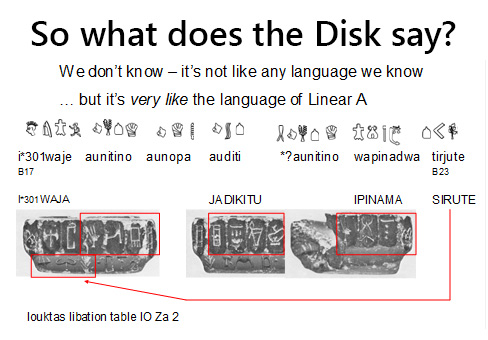 Long story short, what we tried to do is to take the work of Michael Ventris a bit further. After all, he is our hero, Lionel Messi of glossology!

(*Gareth names ‘signs’ the diverse designs we see on the disk, which we mistakenly described as ‘symbols’. He politely corrected us and told us that the difference lies on this detail: a ‘symbol’ can have different meanings, but the script on the disk can only have one.)

I believe that the Disk of Phaistos is the holy scripture of the Minoans, something like a Minoan Bible. The most important thing about it is that it is a timeless script, because it contains sentiment. And finally, I believe with all my heart that language is not as important as the sentiment it evocates when one uses it.

Did you compare the scripts of the disk with other Minoan scriptures?

We compared it with other scripts found in Mt Yuchtas and with others found in the village of Arkalohori. At the end, we were able to associate the Disk of Phaistos with the other Minoan scripts. We found ‘epigraphic continuity', as we call it, common words and most importantly: a common sentence found both in the Disk of Phaistos and the script of Yuchtas.

And what does that common sentence means to us?

That we can now claim with certainty that the Disk of Phaistos is a religious script!

So, in your opinion, what is the Disk of Phaistos?

I believe that it is the holy scripture of the Minoans, something like a Minoan Bible. The fact that the disk was ‘baked’ suggests that it was of great value, it was meant to be preserved. In contrast with other Linear B scripts, whose content was more bureaucratic (and here Gareth notes the deep roots of bureaucracy, inscribed in the Greek DNA!), the Minoans used this script for more personal, sentimental reasons.

The most important thing about this script for me is that it seems timeless, because it contains sentiment, the essence of humanity, something that never changes. Strange as it may sound, it has many things in common with Patti Smith’s song “Because the Night”, my favorite poet of punk. Because it evokes sentiment. And finally, I believe with all my heart that language is not as important as the sentiment it evocates when one uses it.

How was the experience of making a documentary for National Geographic?

It helped me a lot. The crew consisted of five persons who stayed here for one week and working with them was a very educational procedure for me, especially because I had to explain in a simple way and language the details of my scientific research.

You chose to publish your work to media open to the wider public, on your webpage, instead of scientific journals. Why is that, since your work was so important?

I want to provide free access to anyone interested and to not depend on the judgment of each journal committee. It is a matter of democracy and free speech. Anyway, I think that the internet is the modern Library of Alexandria. People have the power to judge on their own! Another advantage of the webpage is that we can update the information whenever needed, without wasting time. We have already improved our work. Finally, I wanted this to be my ‘gift’ to Greece, an antidote to our national depression. Greece, and especially Crete, has given me a family, health and a career in research. I could not ask for more. I am grateful.

Would you say you are an optimist, in the midst of a ‘crisis’? According to your opinion, which is the greatest problem in Greece at this moment?

I remain an optimist because I believe in humans, even though I am not sure that the political leadership of Greece is striving for change. There is a general absence of leadership in our country and lack of role models for the youth. I believe in young people, but unfortunately they expect to see change from us, the white-haired!