You are here:Polis • Life in the city • Unknown City
CRETAZINE

Swimming next to the fortress of Koules, diving from the ‘reef of the Monkey’ at the port and daydreaming that one day the city beach will become the French Riviera of Heraklion. The time when our grandfathers swam separately from our grandmothers within the port of Heraklion is not as far as we may think, as well as the time when the concept of bains mixtes became fashionable and scandalized the conservative society of the time.

Where did our grandfathers swim?

During the first decades of the 20th century, when small Koules stood across the fortress of Koules we see today, two ‘bungalows’ were set within the port of Heraklion: one was for men, left of the portside at the so-called monkey reef, and one for women right next to the fortress wall. 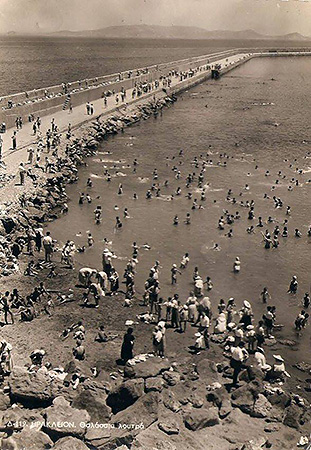 It is the time when men were scandalized only with the thought that women swam in the same waters as them just a few meters away, hidden in the bungalow interiors, grabbing a long rope within the sea, with their curves covered under long swimming suits and shirts. A guardsman with a boat was responsible for ‘law and order’ at the beach, chasing away risky young men who swam underwater for 50m to reach the women’s beach and provoke delirium and women screams -  as well as the broomstick of the female guard! These are the stories brought to us by ‘Knossos’ Magazine issued in January 1955, when the gender apartheid at the beach had already collapsed.

It was at these ‘innocent’ times when the drama of Kavalini took place, a young man who drowned while chasing his dream to…touch a female leg! A 26-28 year old tobacco factory worker and formidable swimmer who could hold his breath for 3 minutes on his way to the women’s beach. Kavalini’s pleasure lasted only a few seconds, long enough to find some woman’s leg under the blurry waters and quickly grab it before the female screams set the alarm of the guardsman. Until the day his attraction to women’s legs became fatal. In one of his underwater erotic missions, Kavalini got tangled in the chains of two boats and did not manage to reach the surface on time. As the article in ‘Knossos’ Magazine testifies, ‘the whole city cried at his funeral’.

Kavalini was able to hold his breath for three minutes, enough for his underwater attacks on female legs.

And then came modern times and bain mixtes, a trend that broke the gender segregation on the beach. Bain mixtes were legalized in the mid 1920s but in Heraklion there were established after ’29, ending the hardships of voyeurs who lurked behind the bungalows with their binoculars. The new fashion became the new scandal and heated subject of discussion in Heraklion. This groundbreaking development made the beach of Poros –where the first bain mixtes were established- the most progressive city corner. Despite the great expectations of locals that the city beach will resemble French Riviera, they finally compromised with more modest facilities: abandoned fishing boats became changing rooms. This is where the first water games started along with ‘sunbathing and endless gossiping’ as the newspaper Anorthosis informs us (issue published on 16/7/1935)

The beach of Trypiti in the ‘60s

Apart from the city beach of Poros that soon became limited with an entrance fee (1 drachma), locals also liked to swim at the beach of Trypiti, defined by a cave-hole known as ‘Trypito Charaki’ (the rock still exists, but the beach and the ‘hole’ was covered by the coastal road). Here bain mixtes became mixed in a whole new level: apart from the two sexes, social classes also met: the working class lied under the same sun as the aristocrats, breaking yet another ‘apartheid’. The world changes indeed!

Despite the prohibitions, people continued to swim across the portside and behind the fortress of Koules. Another interesting fact is that many women preferred to swim right under the electricity factory (today the Museum of Natural History) because they considered the warm waters coming out from the factory as...beneficial.

And then came the ‘60s, the city expanded and locals moved the city beaches towards the nearby regions of Karteros and Amnissos, where bain mixtes of all kinds still take place. Urban development, however, wiped away many of our grandfather’s beaches together with their dream that Heraklion would become a famous beach resort.

* We would like to thank Mr. Minas Georgiadis in Vikelea Library for his valuable help and the materials he shared with us from his personal work on the subject, as well as Mr. Michalis Naletakis for providing us photographs from the beach of Trypiti.