When you cross the rural settlements of otherworldly Ziros Plateau, it is hard to imagine that once upon a time here lived Venetian lords and ladies, wearing the latest fashion of Venice and enjoying the gentle melodies of violin in their luxurious chambers. But even the images you see today in this region are not that far from the reality of Medieval Crete. Well, they are, but in a way they are not… simple village life was always the norm here. What is missing is the elegant (but still brutal) rulers from Venice, whose glory days ended when the next occupiers from the Ottoman Empire took over, but not without leaving their mark in the island’s history and long cultural heritage…

The ruined Medieval settlement of Voila is only one of the remains of these strange times, and a *must* detour when you’re (probably) driving towards the paradise beaches of Xerokampos. Not because you will see majestic palaces or sublime Venice-like monuments…but because nowhere else is the passage of time so well depicted than in humble ruins and the sepulchral silence of nature.

If you plan to visit Voila, we have this little excursion to suggest: http://cretazine.com/en/crete/travel-explore/island-routes/item/274-ziros_plateau

A plateau, a hill, a tower and centuries of history

In the village of Handras you will see the sign to Voila. The distance from there is short, so you can even park your car and walk. 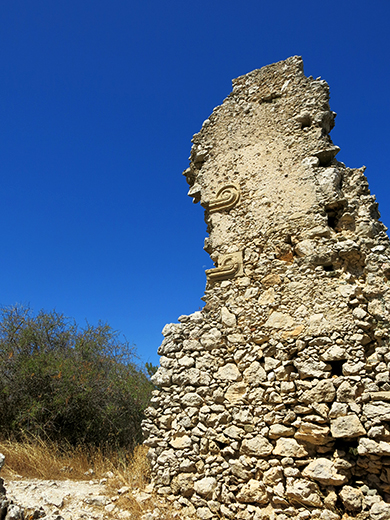 When you arrive at the hill of Voila, ruins of Venetian and Ottoman times are scattered here and there. Most of the remains are actually Ottoman, such as the two fountains that once irrigated the settlement. As for the most imposing ruin of the settlement, ‘Jen Ali’’s tower, all credentials are… confusing. Even though everything resembles the Venetian architecture of the 16th and 17th century, the Turkish inscription on the impressive doorframe of the entrance with the Ottoman anaglyphs informs us that the tower was built in 1740-1741. Most likely, this tower-house was older, reaching deep into the Venetian period, before it was taken over by the Ottomans. We know that during Ottoman times Voila was the center of the Jenitsar battalion and the tower became the home of their lead commander, Jen Ali. The result: A mishmash of two distinct Empires who came to call this place home. 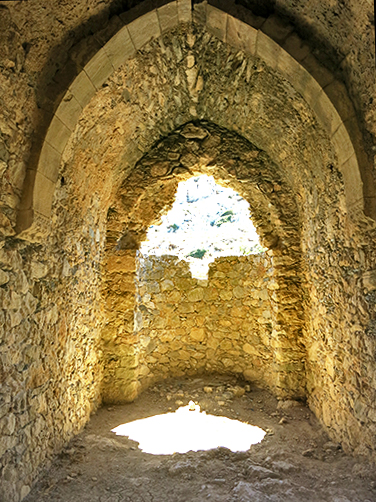 Venetians and Jenitsars… Today only cicadas permanently live in the old pines of Voila. According to official documents, the settlement had almost 300 residents in 1583 and was deserted by the end of the 19th century. At the outskirts of the settlement still stands an old house with Cretan architecture elements. The dust in the blackened fireplace hides memories of home-cooking. Next to the tower stands the 16th century two-aisled chapel of Agios Panteleiomonas. Your walk will naturally end at the temple of Agios Georgios, built at the highest point of the hill, overlooking the settlement, the plateau and… the wind generators on the surrounding mountain tops. In reality, this temple was once two temples that were later united: Agios Georgios (the southern and oldest) and Agios Ioannis. There, at the southwestern corner of Agios Georgios you will find the temple’s best kept secret: the tomb of the ‘owners’. You will recognize it by the faded wall fresco…Look closer and you will see Virgin Mary holding baby Jesus and below her, two noble couples. According to Gerola, one of these lords is Georgios Salomon. Rings a bell? Probably not, but for Greek people this name is inextricably linked to one of our greatest national poets, Dionysios Solomos. And yes, these are his ancestors! 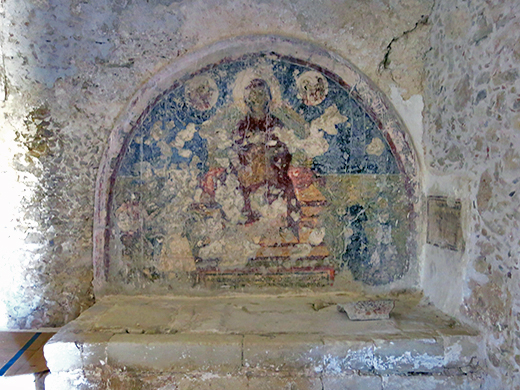 The Salomon family later moved to the island of Zakinthos where the poet was born, but either way, their family roots are from this little ruined village. The villagers in Handras did not miss this opportunity for pride, so they gave the poet’s name to the central square!

This is for the history…the rest are best told by the landscape’s serenity and the medieval aura of the stones.

Do you think it is a coincidence that it was in the eastern corner of Crete where the love epic of Erotokritos was born?