A ‘healing’ walk to the temple of Asclepius, where the rock meets the sea and ancient temples are ‘embedded’ in new ones

Archeological findings indicate that the region was inhabited since Minoan times, but Lissos flourished as the harbour of the Doric city of Elyros (located at the nearby village of Rodovani). Established during the Classical period, Elyros and its two harbours (Lissos and Sougia) prospered during the Hellenistic, Roman and first Byzantine period.

During its peak period, Elyros had 30,000 inhabitants.

Findings indicate that the Cretan goddess Dictyna was worshipped here, although her temple is not yet recovered.

The spring gushing healing water and the foundation of the Asclepieion made Lissos a reputed sanctuary of the Greek world, attracting hundreds of people every year.

The most important statues found in Lissos are the ones of goddess Hygeia (Health), god Asclepius and god Pluto, now exhibited in the archeological museum of Chania.

Lissos had its own coins with the images of Artemis and a dolphin.

The settlement was deserted in about the 7th or 9th century A.D, during the early Christian era. However, the spiritual tradition of the site was continued with the establishment of two Greek Orthodox churches: Agios Kyrikos and the chapel of Panagia (Mary).

On the 15th of July Agios Kyrikos is celebrated and people gather from the night before, setting up a traditional feast and religious ceremony.

The coastal settlement of Sougia (70 km south of Chania) is a brilliant choice for vacation, not only because it satisfies the aspirations of almost any type of tourist, but also because it is located in a place where hiking paths meet, leading to some of the most beautiful and remote corners of the Cretan land. There are no big signs or tourist advertisements of Lissos, like the ones you will see for Knossos and Phaestos, as the site is unorganized and inaccessible to tour buses.

To get there you need to walk for about 1.30 to 2 hours west of Sougia on a relatively easy hiking path marked with signs that starts in the gorge next to the small harbour. The route will first take you through a small but spectacular gorge, where abundant vegetation interchanges with infertile rocky hills and narrow passages. After about 30-40 minutes walking the path will take you up the western wall of the gorge and shortly after to the top of a hill and a small plateau with breathtaking views to the sea from the one side and the mountains from the other. 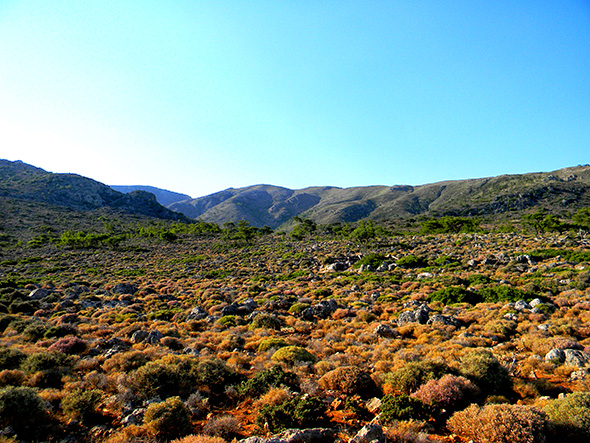 Cross the plateau following the E4 signs, until the path leads you downhill towards the sea and the serene landscape of Lissos, where pristine nature intrudes on the remains of human civilization. And then you realize that the size (of advertisement) doesn’t matter...unpretentious, genuine and exceptionally charming, the site of ancient Lissos welcomes you!

To get to Lissos you need to walk for about 1.30 to 2 hours west of Sougia on a relatively easy hiking path that starts next to the small harbour.

The first thing you will see when you arrive at Lissos is the ancient Asclepieion (healing temple dedicated to god Asclepius) built on the 3rd century B.C, inside a fenced area with a door (without a lock!). The remains of the temple include a mosaic floor, broken pillars and inscriptions scattered around the main building.

A bit further your will see the church of Agios Kyrikos, adorned with impressive frescoes, and from there the path will lead you to a resting area under the shade of carob trees with a water spring. Fill your bottle with fresh water, cut some carobs to chew on (better and healthier than chocolate!) and head towards the small pebble beach of Lissos for a swim. On the way you will meet the temple of Panagia, built with the remains of an ancient temple.

After relaxing by the sea, don’t rush to leave the area. Ancient Lissos is still relatively unexplored and the remains of ancient civilizations –and more modern ones- are scattered everywhere, hidden in bushes, behind rocks, covered by leaves. The past glory of Lissos left us many valuable objects, now exhibited in the archeological museum of Chania and Heraklion. Actually, in no other site of Crete, with the exception of Gortyna, so many pieces of sculpture were found. Therefore we advise you to start your walk early and leave the site late, exploring the area in between with respect and lots of imagination, to envisage how this site looked like lots of centuries ago!