Ethia... the village where time stopped

The steep cliffs of Asterousia mountains do not only end up to some of the most spectacular Cretan coasts but also ‘hide’ many scenic villages. Stone-built houses, narrow lanes for endless strolls, centuries old temples, legends and ancient histories. Ethia might not be high in the charts of the most visited Cretan villages, but it is certainly one of the most beautiful.

Itea, Itia, Ethia. No matter how you call it, the name of the village is definitely of phytological origin, as it is the case with many other villages of Crete (Itia = willow tree). Legends talk about a huge tree with long branches that generously offered its shade to villagers and pass-byers and grand feasts set over its roots. Today you will not find a trace of this legendary tree; however, if you take the uphill road on the rocky hill over Rotasi you will meet the young plane trees that dramatically change the character of the landscape near the village entrance.

You park your car and start walking through neighbourhoods where ruined houses reign along with stone arches, plants that sprout through the carefully carved stones, fireplaces blackened by the fire that once lit them. Standing as the only vivid element in a place where it feels like time suddenly stopped and interrupted all human activity, you can’t help but reflect on the vanity of human civilization. But then you move a little further and you see blossomed gardens and open window blinds that bring you back to simple pleasures and remind you that anyhow, life goes on! Even for the few elderly people left in this little village.

Ethia was recorded in Barozzi’s archives in 1577 with the name Etea and according to other documents in 1583 it had 46 inhabitants. In the 1834 Egyptian census it was recorded as Ethia with 10 Christian and 5 Turkish families. The village demographics kept changing as most of its inhabitants came from different places temporarily or permanently, some to escape from the Turkish army, some to avoid the initiation of a vendetta after a murder and for many other reasons. Travellers, criminals, teachers, shepherds...the Ethian society had it all!

Local products included olive oil, raisins (sultanina) and dairy products, which made it quite autonomous and contributed to its growth. By the ‘40s the village had almost 500 inhabitants.

Neighbourhoods with ruined houses, stone arches, plants that sprout through the carefully carved stones, fireplaces blackened by the fire that once lit them. This is where time stopped...

Take the road to the temple of Panagia (built in 1909) and Profitis Elias, built in 1874 –and according to a local legend- in only one day: the Pasha had imposed austere restrictions to Christians allowing them to construct a church only if they can make it in one day, from dawn to dusk. At the end, according to the same legend, even the Turks were moved by the superhuman efforts of the Christians to meet the deadline, and even helped them in the construction. Take some moments to closely observe the old iconostasis and the unique icons of Panagia (Mary) in both temples and then continue walking uphill to admire a beautiful view to the region. 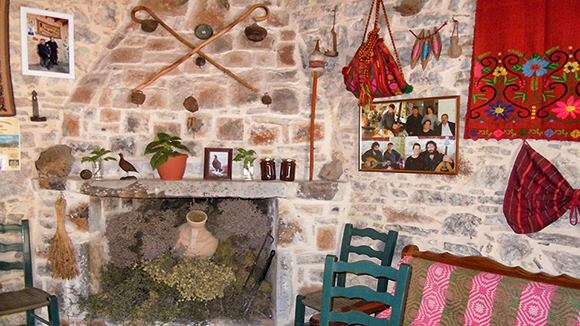 Your walk will conclude to the traditional cafe of the village. The owner is a 100% Cretan figure of the old times, wearing the traditional costume and the same goes for the cafe, decorated with folk art. Enjoy your raki – but take it easy, because remember you have to drive back to wherever you came from!