The villages of the (ex) province of Apokoronas are little treasures that need to be discovered one by one: for their unique colors, nature and architecture. Gavalohori is a good place to start and discover how it feels like to fall in love at first ... walk.

Gavalohori may not be the most famous village of Apokoronas, but it definitely is one of the most charming: you don't meet very often settlements where the traditional architecture has been preserved so well and with so much 'color'. According to tradition, the village was named after the family of one of the 12 Archons of Constantinople (Gavalades) that settled in Crete in 1082, following the orders of Emperor Komninos.

The best you can do when you arrive at the village is to park your car and forget about it. Your feet will lead you to scenic narrow lanes and the old neighborhoods. Traditional architecture, colors and colors again, violet and terracota, benches and arches, houses that preserve the aesthetics of past times (and perhaps, a touch of Byzantium), small green gardens and white yards… we bet that soon you will start daydreaming that one of these houses belongs to you. Don't forget to visit the Historical - Folklore Museum of the village (unfortunately it is closed in winter). There you will see interesting exhibits that bear the history and culture of the region and even the Museum building presents great architectural interest. Among the exhibits, you will see a wedding dress made with traditional lace-making technique ('kopaneli'), an exclusive female tradition (and afterwards you will be inspired to visit the Women's Cooperative of the village). Then, cross the square with the platan tree and continue walking uphill. The signs will lead you to the 17th century pre-industrial olive press and a bit further in the outskirts of the village and the wells of Gavalohori. When you return, the tavern at the picturesque square with the platan tree awaits you (in the summer) for traditional cretan treats and raki. 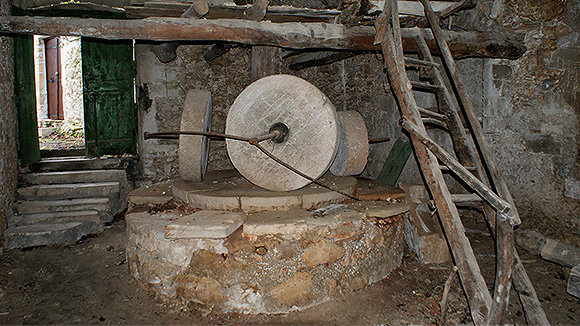 It was restored by the Ministry of Culture and now it is ready to expose the centuries old history of olive oil making in Crete to visitors. It has two spaces with two arches that divide the domes on the ceiling. As you enter in the eastern dome you will see the olive mill with its four millstones, and another one a bit further with one millstone, which is also the oldest (it dates back to the 17th century and the Venetian period). The western dome hosts a metallic olive press (late 19th century – early 20th century). The abandoned tools from the renovation works spoil the magic a bit, but still the domed building and the large millstones remain an impressive sight. 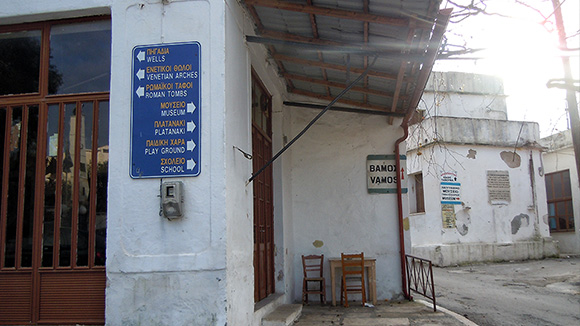 Follow the signs to the uphill road, continue to the left and a few meters outside the village start looking for the platan trees. There, in a lovely glade, you will find the famous wells of Gavalohori (aka 'Gavaliana'). Carved into the stone with semi-domes like ceilings, these contructions are unlike anything similar you've seen in the past. Most probably they were made during the Byzantine times and used to be thirty in number, playing a crucial role for the village's water supply. Today many of them have been covered, but those remaining open still have water inside. However, in case you get an impulse to make a wish, don't bend too much and with all your body weight, as these are still old constructions...