The tourist industry in Crete has a dark history, as it is often responsible for the destructive 'modernization' of many traditional villages. Vamos, however, is one of the bright exceptions. The tourist infrastructure that developed here in the past respected the identity of the village, maintaining the traditional architecture.

Majestic mansions, neoclassical buildings that reflect the glamor of another era and the old neighborhood: stone made pavements, 19th century houses with arches and small gardens where flowers and fruit trees grow. Everything looks like an historical film setting with the snow-capped White Mountains in the background. But the modern-era relics you will discover as you walk deeper into the settlement, like the improvised basketball field with the inscription ‘Platanaki NBA’, will remind you that this is not a lifeless movie set. 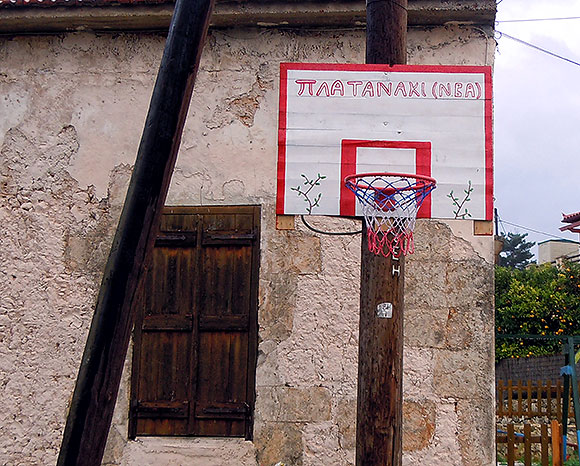 The fact remains that you will not find many villages like Vamos in Crete anymore. The luxurious architecture style you will see here is even rarer; Vamos was once the capital of the municipality of Sfakia and many noble houses were built here, as well as administrative buildings with neoclassical elements. In 1863, Turkish commander Savas Pasha constructed roads, army barracks, a mosque and an administrative center - serai.

Today Vamos can be the ideal ‘base camp’ to explore the whole region of Apokoronas and Chania in general. But before you go far, make sure you visit the nearby sights. Start from the Monastery of Karydi and its impressive olive press with the 12 arches.

As the administrative center of the Turkish army, Vamos inevitably became a main target of the Cretan rebels. Bloody battles took place here in 1866 and 1896, resulting to horrific massacres. In 1896 the village was looted by 4.000 rebels, the Turks that survived fled to other regions and their most important buildings, such as the serai and the tower, were burned down. It was a time of unrest for the whole island that lasted for centuries: battles won and lost, massacres, villages changing proprietors.

And then came freedom, urbanization and oblivion for the historical villages. Vamos, however, survived this multifacet transition. A decade ago, more or less, many expatriated locals returned here and started renovating their grandfather’s houses and not only that: they brought traditional-oriented development and the village flourished once again. Wineries, dairy factories, small guest houses and other 18th, 19th and 20th century buildings were renovated and converted to traditional guest houses with all modern comforts. The traditional architecture was maintained and the twin elements wood & stone ruled the village once again.

Today Vamos can be the ideal ‘base camp’ to explore the whole region of Apokoronas and Chania in general. But before you go far, make sure you visit the nearby sights. Start from the Monastery of Karydi. The Monastery is dedicated to Agios Georgios (St. George) and is only 2km away from the settlement of Vamos. It is built in a privileged position (as it is the case for almost all Monasteries!) overlooking the whole area;  the view is only blocked by the White Mountains (Lefka Ori). The temple was built somewhere between 1850-1880, the time when the Monastery acquired great wealth mainly from donations (even from Turks) and became a luxurious cottage. The real jewel of the Monastery, however, is its olive press with the 12 arches and the sky as a ceiling. Four olive mills and windows frame the snow-capped summits and the blossomed orange trees. The whole scenery is perfect for experimentation with your camera and your wild imagination, of course…

Another sight worth visiting is the 13th century temple of Theotokos, near the entrance to the village of Vamos. Open the fenced gateway, placed by some shepherd to limit his herd, and walk to the old temple. Old frescoes with the eyes of the saints removed (a sacrilege, typical in the Turkish period) and ruins that now seem perfectly adjusted to the natural environment.